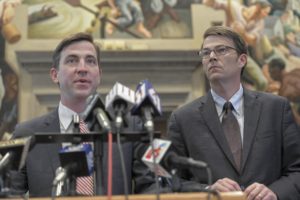 House officials issued a release on Tuesday evening, saying that the House Special Investigative Committee on Oversight’s findings will be posted on the House website at that time.

House Speaker Todd Richardson, R-Poplar Bluff, Republican House leaders and members of the committee have called a press conference for Wednesday evening at 6, in the House chamber’s gallery in Jefferson City.

A St. Louis City grand jury has indicted Greitens for one felony count of invasion of privacy, and his jury trial is scheduled for May 14 in downtown St. Louis.

Greitens’ lawyer, former U.S. Attorney Ed Dowd, has said that the release of any report before the May trial date in St. Louis will impact Greitens’ ability to obtain a fair trial.

When he was appointed in late February, House Special Investigative Committee on Oversight Chairman Jay Barnes, R-Jefferson City, told the Capitol Press Corps that the committee would focus “on the underlying facts of the indictment and the circumstances surrounding them.”