Senator Roy Blunt (R) emphasized agriculture, broadband and jobs during his Wednesday address to the Missouri House in Jefferson City. 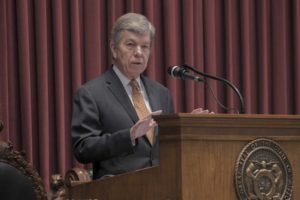 “Nobody is better at this than we are as a country, and frankly nobody in the country is better positioned than we are to take advantage of that unbelievable opening,” Blunt says.

Senator Blunt has described the Mississippi River valley as the biggest piece of contiguous agricultural ground in the world, with the “best farmers and ranchers in the world.”

Blunt tells the Missouri House that broadband was a key topic of discussion at an ag forum he participated in last week in Springfield, with Missouri Department of Agriculture (MDA) Director Chris Chinn and Missouri Farm Bureau President Blake Hurst. 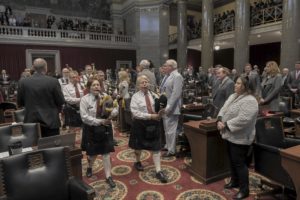 “We need to do something about that. Broadband is going to be just as important over the next 50 years as the telephone was over the last 50 years,” Blunt says.

The Missouri House has voted 149-1 to approve legislation from State Rep. Curtis Trent, R-Springfield, that would enable the state’s rural electric cooperatives to make unused capacity available for residential and commercial purposes.

Trent’s bill declares that the expansion of broadband service is in the best interests of Missourians.

The Missouri Senate Commerce, Consumer Protection, Energy and the Environment Committee has approved the bill, which is now waiting for debate on the Senate floor.

This is the eighth straight year that Senator Blunt has addressed the House. He was elected to the Senate in 2010, and was re-elected in 2016.

Meantime, Missouri House members on both sides of the aisle paused for a moment of silence Wednesday, which was the 50th anniversary of the assassination of Dr. Martin Luther King Jr.

Blunt describes Dr. King as “one of the most influential voices of the 20th century.” Blunt tells the House it’s a good time to think about the importance and value of life.

“And the difference that one committed life can make, and I think with the Speaker’s indulgence I’m going to suggest we just take a few moments here of silence and think about all those issues particularly about Dr. King,” says Blunt.

Blunt says Dr. King’s contributions to the civil rights movement inspired generations of Americans to carry on his legacy.