You are here: Home / Business / Schroer: “Waylon Jennings’ music lives in the hearts of many Missourians” (AUDIO)

Legislation that would designate part of Highway P in eastern Missouri’s St. Charles County as the “Waylon Jennings Memorial Highway” has been heard by the Missouri House Transportation Committee in Jefferson City. 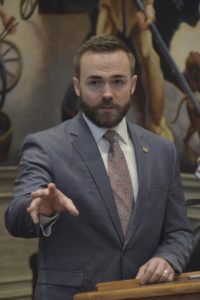 “Waylon Jennings has to be one of my favorite country music stars,” Schroer says. “I think he’s kind of set the tone for what country music is, what it should be about.”

Schroer tells Missourinet this stretch of Highway P goes from O’Fallon to Lincoln County, and reminds him of a popular television show called the “Dukes of Hazzard.”

Schroer has a tattoo of Jennings, who was inducted into the Country Music Hall of Fame in 2001.

The biggest hit of Jennings’ career was “Good ‘Ol Boys”, which at one time was the number one song on the Billboard country singles chart.

“This stretch of Highway P goes from O’Fallon into St. Paul. It eventually ends up going into Troy (Missouri). But it’s a very wooded area on both sides. There’s some farms out there,” says Schroer.

The Missouri House Transportation Committee is expected to vote on the bill in April.

While Jennings never lived in Missouri, Schroer tells Missourinet Jennings performed on tour in the Show-Me State many times.

Under the bill, the highway signs would be paid for by private donations.

Schroer hopes a “Waylon Jennings Memorial Highway” would be a tourist attraction for that area. He envisions I-70 travelers stopping off to visit the highway and eating at the local restaurants there.

Time could be the biggest challenge to Schroer’s bill. The 2018 session ends May 18.

He notes there are country music fans in the Missouri Senate, and says his measure could be attached to a Senate bill.

Click here to listen to the full interview between Missourinet’s Brian Hauswirth and State Rep. Nick Schroer, which was recorded on March 22, 2018: