Missouri Senate leaders have expressed concern over a far-reaching tax bill that received its initial approval this week. 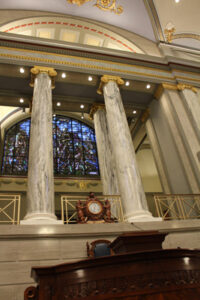 The sweeping 428-page proposal passed through the Republican-dominated chamber with only two amendments and relatively little discussion in roughly 30 minutes.

GOP Senate President Pro Tem Ron Richard of Joplin said he “about fell off the dais” when he saw what had taken place.  In a Thursday news conference with reporters, Richard noted he was a “no” on the voice vote the chamber took Wednesday.

He was worried that the measure would carry a big price tag for the state if it became law.  A non-partisan legislative research group hasn’t yet released an estimate on the bill’s impact in its current form.

Richard also said he had reservations over how the measure would mix with previous tax cut legislation that went into effect this year, and with the massive tax plan Congress recently enacted.

The term-limited lawmaker who is finishing his 16-year legislative run in 2018 says he wants to leave the state in good financial shape.  “I’d like to leave the state of Missouri in a position where they could actually have enough money to do business,” said Richard.

“I know (what) he was doing for a fact is going around to every member, Democrat or Republican, going through the bill, asking what they liked or didn’t like, trying to accommodate their needs and taking things out they thought were bad, adding things they thought would helpful,” said Kehoe.  “And as long as it wasn’t horrible policy for the bill, he incorporated that.”

Eigel is handling a measure which is actually a combination of tax bills.

Among other things, it would lower the income tax most Missourians pay from 5.9% to 5.25%.  The Corporate rate would drop from 6.25% to 5.25%, a smaller decrease than the reduction to 4.25% that was previously in the legislation.

The measure seeks to raise revenues to offset tax cuts by lowering individual income tax deductions for federal taxes while completely eliminating the same deductions for corporations.   It would also enter the state into the Streamlined Sales and Use Tax Agreement, a national effort aimed at generating tax revenues from online sales.

In addition, the plan would gradually raise the state’s motor fuel tax by 6 cents over a six-year period, with triggers to increase it to as high as 25 cents per gallon.  A provision to limit low-income housing tax credits to $135 million has been dumped from the measure.

Republican Dan Brown of Rolla chairs the Appropriations Committee which oversees budget matters in the Senate.  He advised Eigel to be cautious moving forward with his proposal, noting tax reform packages in two neighboring states led to disastrous results.

“You’ve got to make these changes pretty carefully,” said Brown.  “We see what Kansas and Oklahoma are doing.  They did a lot of tax cuts, tax reform.  And now this year they’re passing bills to really raise taxes.  I don’t want to see Missouri get in that shape.”

The Senate will have to vote on the massive tax proposal one more time before it can be sent to the Missouri House.  A competing tax bill is currently moving through the lower chamber from Republican Speaker Pro-Tem Elijah Haahr of Springfield.