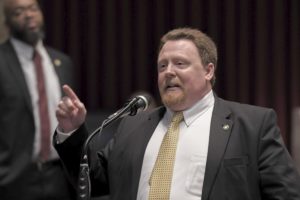 “There’s no question we saw an uptick in the incidents on our system, and security has been labeled by our passengers as their number one concern on the system,” Nations says.

Nations tells Missouri lawmakers that riders are complaining about loud music, obscene language and “bad behavior” on these trains.

Thousands of people use MetroLink daily to get to work, as well as to St. Louis Cardinal baseball and Blues hockey games downtown.

“When you police a transit system, it’s critical that you have a lot of visibility,” Zott testifies. “And that means your officers have to be on the trains all the time, not for an hour, not for two hours, all the time.”

He says Metro has security as well, and that St. Clair County, Illinois now has 15 officers.

The trains cross the Mississippi River into Illinois.

“Many people are simply afraid for their lives right now and would rather drive to the ballgame (Busch Stadium) instead of take MetroLink and are willing to pay that $20 parking fee just to ensure they get there safely,” Matthiesen says.

Zott tells lawmakers there are cameras on the MetroLink trains, along with emergency buttons on platforms. Zott says the drivers have alarms.

Matthiesen says he’s also concerned to hear that some crime data hasn’t been given to Bi-State Development, which operates the MetroLink.

“I think it’s time that we get all parties to the table to take a look at how we are handling the crime, what we can do to improve it, and more importantly it seems like there’s a breakdown of cooperation from agency to agency,” says Matthiesen.

MetroLink officials testify that St. Louis Police have been riding the trains with their officers, saying visibility is a deterrent.

Click here to listen to the full interview between Missourinet’s Brian Hauswirth and State Rep. Mark Matthiesen, R-Maryland Heights, which was recorded at the Missouri Capitol in Jefferson City on March 14, 2018: