You are here: Home / Legislature / House committee considers bill with consequences for racial profiling by police

Missouri lawmakers are looking at a bill to curb discriminatory policing among law enforcement agencies.  The state has been tracking information, including a driver’s race, for every vehicle stop made since 2000 after allegations of racial profiling surfaced. 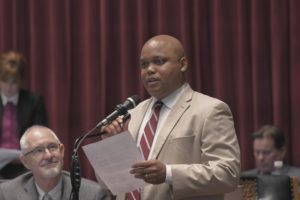 But despite the scrutiny the statistics are given, the disparity in the number of African American drivers getting pulled over compared to white motorists remains high.  In fact, in some cities and counties, the discrepancy increased in recent years.

Discriminatory policing is illegal in Missouri, but there are no penalties in place to discourage the practice.  The proposal from Republican Representative Shamed Dogan of Ballwin creates disciplinary options on two levels.

“Essentially what this bill is about is adding just some potential consequences for both individuals as well as law enforcement agencies that are found to be engaging in discriminatory policing or racial profiling,” said Dogan.

The bill does a couple of things before it designates penalties for misconduct.  It establishes a consent search policy and requires information to be gathered by officers from every vehicle stop made.  That information would then analyzed by the attorney general.

In order to search a vehicle without probable cause, an officer would have to get written or recorded audio or video consent from the person who was stopped.

Prior to requesting a search, the officer would have to clearly state, either orally or in writing, in a language the person being questioned clearly understands that their consent must be voluntary.

While speaking in favor of the bill during its hearing before the House Crime Prevention and Public Safety Committee, ACLU Missouri Legislative and Policy Director Sara Baker noted consent search policies are becoming more commonplace across the country.

The data gathering portion of the bill requires officers to collect 11 pieces of information ranging from the reason for the stop, to whether a search was conducted, to whether a warning or citation was issued.

Each law enforcement agency would then submit all the information it gathers from officers in the form of a report to the attorney general by March 1st of each year.

The attorney general would then analyze the data received and submit an annual report to the governor, the state legislature and each law enforcement agency by June first of each year.

The attorney general’s report would identify situations where racial and ethnic groups are disproportionately affected by law enforcement activity so that further analysis could identify whether officers are engaging in discriminatory policing.

The report would provide disparities in stops, post-stop activities, searches, and contraband found.  Local police agencies could then review the performance of officers along with verified complaints to determine if any discipline is warranted.

Under the legislation, the discipline could include firing, counseling, and training of any officer found to have engaged in discriminatory policing within ninety days of the review.

The bill also provides a process for the attorney general to review the performance of police agencies.  If a law enforcement department is found to have a disproportionate number of minority drivers stopped compared to the state average, the attorney general would look into the disparity and offer resources to alleviate the problem.

If the police agency failed to make corrections after three years,  further resources and training would be required.

If the racial discrepancy persists for an additional three years, the attorney general would have the option to remove the police agency’s funding.  He could do so by instructing the local governing body to forfeit twenty-five percent of the police departments revenue from fines, bond forfeitures, and court costs for traffic violations.

The amount would be sent to the state’s general fund to be used for officer training.  Currently, the Governor can withhold state funds from a police agency, but only if the agency fails to collect and report data, not for a disparity in traffic stops.

Representative Dogan, the bill’s sponsor, noted during the hearing that statistics don’t always tell the full story and that police agencies would be allowed to prove extenuating circumstances.

Still, harassment and police discrimination is a very real experience for some people who traveled across the state to appear before the committee.   Justice Gatson, who lives with her husband in Kansas City, describes the phenomenon as a nearly daily experience.

“This is something that happens all the time,” said Gatson.  “It happens in my community.  My friends have stories.  I’ll go home tonight and somebody will share a story about being stopped by the cops today.”

Last August, the NAACP issued a travel advisory warning people of color that their civil rights could be violated in the state of Missouri.

The advisory cited a state attorney general report that found African-American drivers were 75% more likely to be stopped and searched than white drivers.  Rod Chapel Jr., Missouri NAACP State Conference president, spoke at the hearing on Representative Dogan’s bill.  He told Missourinet afterward that the advisory is still in effect.

No one spoke against the bill before the committee.  Dogan introduced similar legislation last year which was warmly received in committee.  He said changes were made to this year’s version to alleviate concerns from law enforcement personnel.