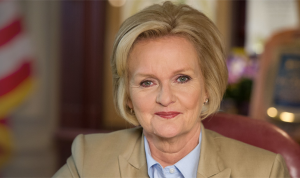 McCaskill is considered one of the most vulnerable Democrats running for re-election this year in the U.S. Senate. Hawley, a rising star in the crowded Republican field, is considered a favorite to unseat McCaskill this year.

McCaskill, who supported Clinton for president, tells MSNBC that Clinton’s comments were not helpful to her. Clinton made the remarks during a trip to India to promote her new book about losing the election to Trump.

“I understand the point she was trying to make but it felt like she was criticizing Missouri voters. Talking about drawing a line, I would draw the line there. I have great respect for Missouri voters,” she says. “There are a lot of reasons they voted for Donald Trump, some of which I completed understand. I mean frustration is a powerful motivator. If you’ve played by the rules and worked hard all your life and you’re further behind this year than you were ten years ago, no wonder you want something completely different.”

McCaskill goes on to say that Clinton’s message was being taken out of context.

“She knows things that you say are taken out of context,” McCaskill says.

McCaskill says she would really appreciate if Clinton would be more careful and show respect to every American voter – not just the ones who voted for Clinton.