(NASCAR)—Clint Bowyer knows what it’s like to be a winner again. 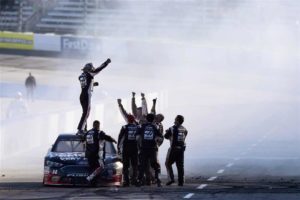 Bowyer, our adopted Missourian, broke his190-race winless streak by outrunning Kyle Busch to the checkered flag at Martinsville, Virginia to pick up his first win since October 13, 2012 and become the first driver in NASCAR history to win Cup races for Chevrolet, Ford, and Toyota. He  led 215 of the last 216 laps, seventy more laps than he had led, combined, in the last four years.  His 190-race winless streak is the third-longest in NASCAR history.

Bowyer, who likes to relax at his place at the Lake of the Ozarks, had to wait until Monday to race because heavy snow wiped out all track activity on Sunday.   It’s his first win since taking over the number 14 car from Tony Stewart, who retired after the 2016 season.  He said after the race he’d gotten a message from Stewart before the race telling him, “Be patient. Let the race come to you,” which Bowyer says is exactly what happened. 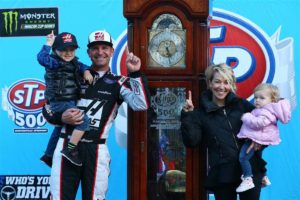 The victory means he will win one of the most cherished trophies in NASCAR—a Ridgeway grandfather clock, which has been given to Martinsville winners for 64 of the 70 years that NASCAR has run there. (His wife, Lorra, three-year old son Cash, and fifteen-month old daughter, Presley, join Bowyer and the clock.)  The win moves him to third place in the overall points standings and qualifies him for the ten-race championship playoffs.

Bowyer is from Emporia, Kansas and honed his racing skills on tracks in Kansas and Missouri.  He was the 2002 Weekly Racing Series Midwest Champion, partly because of his Late Model championship at the I-70 Speedway in Odessa, the place where he ran his first races on asphalt.

Joplin driver Jamie McMurray was running in the second-ten when Austin Dillon bumped him on the 385th of the race’s 500 laps, causing him to spin.  The incident and the ensuing pit stop for repairs dropped McMurray to 26th, five laps off the pace on the .526 mile paper-clip shaped track.

NASCAR takes the Easter weekend off before returning to a high-speed oval on April 8 at Texas.