(NASCAR)—The first short-track race of the year has been snowed out. 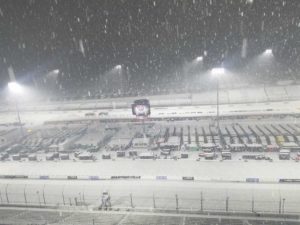 Snow has forced NASCAR to run its race at Martinsville on Monday.  Because qualifying was snowed out, starting positions will be based on points with Martin Truex Jr., and Kyle Larson starting on the front row.  Joplin driver Jamie McMurray, looking for some magic on a short track (.526 miles) that has been missing on the bigger tracks in the first five races, will start 26th.  Clint Bowyer starts ninth.

The trucks will race at 10 a.m., our time and the Cup cars will get the green flag about 1 p.m.

(INDYCAR)—Fears of bad weather have forced IndyCar to postpone testing at the Indianapolis Motor Speedway until April 30-May 2.  Open testing and Rookie Orientation and refresher runs had been scheduled to be this Tuesday-Thursday. But the outlook for rain and high winds has pushed the running back a month.

IndyCar has a new broadcast partner, beginning next year.  NBC Sports Group will replace ABC, which has had the broadcast rights since 1965. IndyCar officials say the NBC package will put more races on broadcast channels. In addition, the series will see much of its content available through NBC Sports Gold, a direct-to-consumer subscription service. 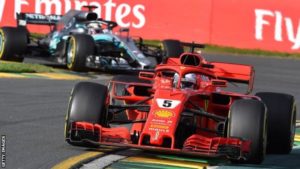 The race was the first race with the new “halo” driver-protection device in place.  The device was tested in the off-season and installed to keep crash debris from reaching the driver.