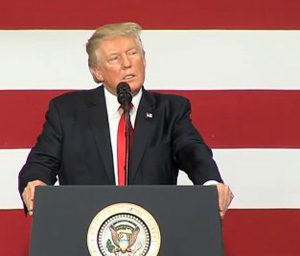 President Trump’s order begins today that places taxes on steel and aluminum shipped into the U.S. from other countries. During a hearing this week with Trump’s trade chief, U.S. Senator Claire McCaskill, D-Missouri, says the taxes are going to harm many Missouri businesses, including the manufacturing and agriculture sectors.

“Some of this issue is about businesses that are relying on specialized steel imports. It’s not a matter of price, it’s a matter of availability. I’ve got a small company in Joplin that relies on Japanese specialized steel to make the bearings—and it’s not available in the United States,” says McCaskill. “It is not one of these things that they can actually turn to a more expensive. They’re not bringing this in because they’re getting it cheaper than they can get it in the United States. They’re bringing it in because they can’t get it.”

Democrats say the taxes will create a trade war with other countries, increase prices of many goods and cost some manufacturing workers their jobs.

The president says America’s reliance on imported metals jeopardizes U.S. national security. He goes on to say that many countries are calling to negotiate better trade deals because they don’t want to pay the steel and aluminum tariffs.

Under Trump’s order, aluminum shipments coming to the U.S. from other countries will be taxed 15% and steel imports will get slapped with a 25% tax.