You are here: Home / News / 11-year-old Missourian gets world record catch of fish

An 11-year-old boy from south-central Missouri’s Dixon has set a state and world record in the sport of fishing. 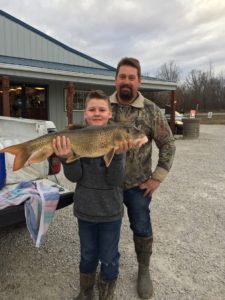 Maverick Yoakum became the state’s most recent record-breaking angler by hooking a river redhorse on Tavern Creek using a rod and reel.  Paperwork is being done to finalize the world record through the International Game Fish Association, but Yoakum’s 10-pound, 3-ounce catch set a new standard for the fish.

The previous 9-pound, 13 ounces world record catch for a river redhorse was also fished out of the same Tavern Creek near the town of St. Elizabeth by an adult in 2016.

Missouri Department of Conservation (MDC) Fisheries Programs Specialist Andrew Branson says Yoakum holds a special place among the few world record holders in the state.  “Missouri does have a handful,” said Branson.  “I think we’ve got five or so current world records.  But none of them are from a youth.  So, this is kind of a special deal, having a youth do it.”

River redhorse is part of the sucker family of fish.

The Encyclopedia Britannica website describes suckers as somewhat sluggish fish that live on the bottom of lakes and slow streams where they feed by sucking up invertebrates and plants.  According to the state Conservation Department, they are a moderately chubby, coarse-scaled fish with an upper-body fin containing 12 or 13 rays.

Branson says the fish are prevalent throughout waterways in the Ozarks.  “It’s going to be in the southern streams of Missouri,” Branson said.  “A lot of these sucker type fish prefer the gravel bottom streams, slightly clearer streams.  And those are the types of streams you find in the Ozarks here in Missouri.”

The overall record capture of a river redhorse in Missouri is about 17 pounds, which was done through the alternative method known as gigging.  Branson describes gigging as being done with a long pole that has forked multi-prongs on the end that are used to impale the fish.

While the river redhorse does get much larger than the catch obtained by Yoakum, the International Game Fish Association (IGFA) only recognizes fish taken by pole and line method he used.

Branson said he wasn’t sure about the organization’s reasoning, but speculated that it might consider pole and line as the most legitimate form of the sport.

“It could be kind of like they only recognize methods where the fish ultimately has the choice of whether it’s going to bite the hook or not,” said Branson.  “That might be what they’re thinking.”

Yoakum was using worms when he caught the fish. The Conservation Department staff verified the record-weight fish using a certified scale in south-central Missouri’s Brinktown.

Yoakum said he knew after battling hard that the fish he caught was special.  “I fought the fish for about two to three minutes before I got it to the bank,” said Yoakum. “I thought I caught a pretty big fish, but I didn’t know it was a state record until my dad told me to look it up online. I’m super excited to hold a state record!”

Yoakum is still in a dream state over his catch and is thankful to his father for providing the opportunity break the record.  “I can’t believe it!” he said. “I want to thank my dad for always taking me fishing because if it wasn’t for him taking me fishing I wouldn’t have caught a fish like I did.”

More more information on state-record fish is available on the Conservation Department’s website.