Defending NASCAR champion Martin Truex Jr., defined it in winning this weekend’s race at on the two-mile oval at Fontana, California.  He started on the pole for the second week in a row, led 125 of the 200 laps, won each stage, and finished almost twelve seconds ahead of his closes challenger, Kyle Larson.

Truex had grown a little tired of people asking him, after only four races, why he wasn’t winning stages and races as he did last year when he racked up eight wins and led more stages than any other driver.   The race at Fontana was only the fifth race of the thiry-six race season.

The pre-race focus had been on Kevin Harvick, looking for his fourth straight win.  But those hopes vanished when Harvick touched Larson’s car and went into the fourth turn wall.  He was still running at the end but was nine laps down and finished thirty-fifth in the thirty-seven car field.

The dominating performance moved Truex into the points lead, nine points up on Kyle Busch. 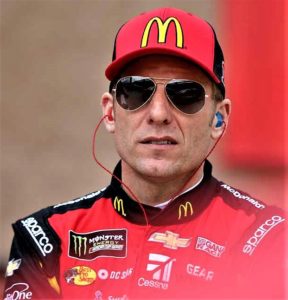 Joplin’s Jamie McMurray spent a good part of the race running just outside the top ten bur had trouble getting to the pits on his last stop and finished a lap back, seventeenth.  Clint Bowyer, who has a place at the Lake of the Ozarks, ran in the top ten for a time but dropped to eleventh in the closing laps.

NASCAR has wrapped up its annual warm-weather West Coast swing and heads to the short tack at Martinsville next weekend.

(INDYCAR)—A. J. Foyt has been attacked by Africanized killer bees.  Again.  And they haven’t killed him. Again.   He was hospitalized briefly until his condition stabilized.  Foyt apparently angered the bees when he knocked down their tree with his bulldozer on his Texas ranch.

He almost died after an attack nine years ago that left him with about two-hundred stingers in his head.

Indycar’s second race of the year is at Phoenix, April 7.  A special event will honor the drivers who drove in the race twenty-five years ago.  Four cars driven by Mario Andretti will be on display, including the car he drove to the win in 1993, the last of his 52 wins in IndyCar. Only Foyt has more career wins, with 67.

The Indianapolis 500 is building a new premium viewing area for this year’s race. It’s on the outside of the third turn, giving seat-holders views of the cars as they come out of turn two, down the long back straight away, and through turns three and four.  The Speedway says demand has increased for premium seating, with the present suits nearing the sellout stage.

Tickets for the new turn three club are $750 but that includes food, beer, and wine. The track will also issue parking passes for every four tickets purchased and offer dedicated restrooms and live television and audio feeds.

(FORMULA 1)—Formula 1 starts its season next weekend in Australia with a number of drivers looking for milestones this season.

Lewis Hamilton and Sebastien Vettel are chasing their fifth world championships, which would tie them with the great Argentinian driver from the 1950s, Juan Manuel Fangio.  Only Michael Schumacher won the title more times, seven.  Fangio is considered by both Hamilton and Vettel as the master, however.  He drove in a dangerous era when fourteen-drivers were killed in a ten-year period yet won forty-seven percent of his races.  Vettel and Hamklton both have run about four times as many races. Hamilton has won about thirty percent of his races, Vettel about twenty-four percent.

Only three drivers have recorded at least 100 podium finishes in Formula 1—Michael Schumacher, Lewis Hamilton, and Alain Prost.  Vettel is one finish away from joining the group. Fernando Alonso needs three and Kimi Raikkonen needs nine.

Alonso this year will become only the fourth F1 driver to start three-hundred races and if he runs next year, he could break Rubens Barrichello’s record of 322 straight Grand Prix starts.

Previous Post: « Disappointing first-round exit for Mizzou women. Pingeton: “We absolutely have work to do.”
Next Post: First half of Missouri legislative session includes little movement on life-saving measures »