The Missouri Senate is weighing its options on how to address a non-functioning ethics investigation into Governor Eric Greitens. 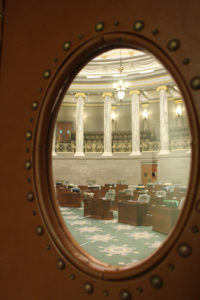 The Missouri Ethics Committee is composed of six members who are appointed by the governor and confirmed or rejected by the Senate.  Three members, by law, left office Thursday at midnight after serving their terms, which can’t be extended.

Governor Greitens, who is already under several investigations, has failed to appoint replacements.  The commission is required to have at least four members in place to issue decisions, which means it’s now non-functional in that capacity.

During floor discussion, Thursday, two Senators – both Republicans like Greitens – expressed alarm at the situation.  Rob Schaaf of St. Joseph indicated he thought Greitens would use strong-arm tactics when and if he appoints a commissioner.

“Can you imagine the verbal arm-twisting of the person who he would appoint to the ethics commission? Say like (he would say) ‘You know, you really need to kind of not find me guilty’.  I mean, that’s just not cool,” said Schaaf.

Bob Dixon of Springfield was extremely troubled by the conflict of interest that would arise if the governor even makes an appointment.  “I’m concerned that even if they do act and appoint someone, that we have a constitutional crisis now on our plate,” Dixon said.  “The person who the ethics complaint was filed against has to appoint someone to decide his case”.

The complaint alleges the governor falsely reported the way his campaign obtained a donor list from a charity he founded and failed to disclose that it also got the charity’s email list.

The president of the charity in question, The Mission Continues, posted an online statement last week assuring supporters that the charity did not authorize Greitens’ campaign to use its donor list.

Mission Continues president Spencer Kympton stated his organization did not provide or approve any use of donors’ information to the Greitens campaign for political or campaign purposes.

The previous week, Attorney General Josh Hawley announced he would be launching a probe into the governor’s campaign’s use of donor and email lists connected to the charity.  Greitens paid a $100 dollar fine to ethics commission in April 2017 after admitting his campaign had used the charity’s donor list.

Thursday Republican Senate President Pro Tem Ron Richard of Joplin told reporters the governor’s office should have submitted a letter in February with appointments to the commission.

He said he and Republican Senate Majority Floor Leader Mike Kehoe of Jefferson City are working with Senator Dixon, who chairs the chamber’s Judiciary Committee, to explore options to make the ethics committee functional.

It’s not known if anything can be done in the short term if Greitens declines to make any appointments.  Kehoe said it might be time for lawmakers to look at changing the rules surrounding the Ethics Commission.

“Maybe it’s time to look at treating those appointees like other board members that they serve until their replacement is named,” said Kehoe.  “You certainly don’t want to get to a point, because you never know what’s going to be going in the state at that time, where you don’t have a full ethics commission.”

The ethics commission is only state board where the terms of its members cannot be extended until a replacement is in place.

Greitens has also been indicted by a grand jury on felony charges after allegedly snapping a nonconsensual photo of his partially nude mistress and then threatening to distribute it if she mentioned the encounter.  St. Louis Circuit Attorney Kim Gardner is trying the case and has expanded her investigation into Greitens’ activities.

In addition, a special Missouri House committee is investigating the governor’s actions to determine if impeachment proceedings are appropriate.