A Sunday night candlelight vigil was held in western Missouri’s Clinton, where the mother and father, as well as friends, paid tribute to fallen officer Ryan Morton.

The U.S. Honor Flag was also sent to the town in honor of Morton, who was shot and killed while responding to a disturbance call last Tuesday night.

Two other officers were also shot during the incident but did not sustain life-threatening injuries. According to the Officer Down Memorial Page, 27 officers have been killed in the line of duty this year.  Morton is the fourth out five so far this month.

Morton was deployed two times after joining the Army National Guard in 2005. WDAF reports he took a job with Veterans Affairs in the Kansas City area after spending roughly two years with the Clinton Police Department. Morton returned to the force to personally fill the spot left by Officer Gary Michael who was gunned down seven months to the day before Morton was killed.

Law enforcement personnel are still trying to figure out how police were dispatched to the wrong address where they, by chance, encountered James Waters who was under investigation for rape. Waters opened fire on the officers after they entered the residence. He was later found dead in a bathroom in the house.

Waters had a lengthy criminal record with numerous felony arrests and spent several years in jail or prison.  As a convicted felon, he wasn’t supposed to be in possession of firearms.

Multiple weapons were found inside the residence.  Occupant Tammy Widger was arrested on unrelated charges of methamphetamine.

KSDK reports officers from the Florissant Police Department near St. Louis will be among those attending Morton’s Monday funeral, making a 3 and a half hour drive to pay their respects and take part in Morton’s funeral procession. 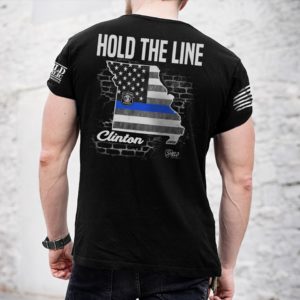 Shield Republic, which sells police and firefighter apparel, has a long sleeve shirt featuring the phrase “Hold The Line” and map of Missouri marked with the location of Clinton. The company says 100% of net profits will be donated to the Clinton Missouri Police Department in honor of Police Officer Christopher Morton.