Harvick says he and his team were motivated to win at Phoenix after NASCAR imposed heavy penalties after his car failed a post-race inspection after the Las Vegas race. He’s the fifteenth driver in NASCAR’s modern era (since 1972) to win at least three races in a row. 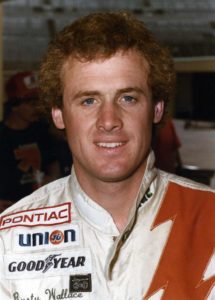 Former driver Rusty Wallace of St. Louis is one of only two drivers to win three straight races three times.  He did it the first time in 1988 (pictured), and followed up with triples in 1993 and 1994. He won NASCAR’s top championship in 1989.

Phoenix has not been a good track to Joplin’s Jamie McMurray, who has only five top tens in 36 races there and has posted an average finish of 19th.  He came home 26th after starting eighth in this race and is still looking for his first top ten finish of 2018.  McMurray ran his first Xfinity race since 2013 on Saturday, starting sixth and finishing fifth.

Jimmie Johnson and Ryan Newman made their 580th consecutive start, moving into a tie for ninth place on the all-time list and dropping Fenton’s Ken Schrader to eleventh.  Harvick is likely to push Schrader down another notch soon.  He has made 572 straight starts.

NASCAR wraps up its warm-weather early-season western swing at Fontana, California next weekend.

(NASCAR)—Twenty people have been nominated for the NASCAR Hall of Fame. 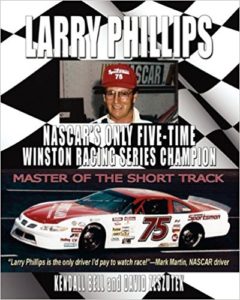 The list includes legendary Missouri Driver Larry Phillips, the only person to win the NASCAR Weekly Series national championship five times (1989, 1991, 1992, 1995, and 1996).  He also won seven regional championships and thirteen track championships in his 42-year career.  Phillips died in 2004.  This is the sixth time he has been nominated for the Hall of Fame, which is in Charlotte, North Carolina.  Hall of Famer Mark Martin has said Phillips “is the only driver I’d pay to watch race.”  His life and career have been compiled in a book by Kendall Bell and David Zeszutek.

Five people will be voted into the Hall. Fans have a voice. They can vote on May 23rd.

(INDYCAR)—Sebastian Bourdais, who returned to racing at Gateway International last fall after a horrible crash at Indianapolis in May, has won this year’s first IndyCar race, slipping into the lead when two drivers in front of him tangled two laps from the finish on the St. Petersburg (Florida) street course.

Rookie Robert Wickens, a surprise pole winner, had led most of the race until a late full-course caution gave 2016 Indianapolis 500 winner Alexander Rossi a chance to challenge for the lead.  When Rossi tried to go underneath Wickens on the first turn after the restart, the two cars touched wheels and Wickens spun out.  Bourdais took the lead and got the win under yellow. 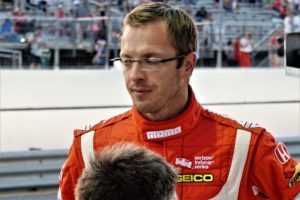 Bourdais also won last year’s race and was leading the points standings when his crash at Indianapolis sidelined him with a broken pelvis until the race across the river from St. Louis in August. (pictured) Graham Rahal also slipped past Rossi and Wickens to finish second. Rossi came home third.

The win was the 37th of his IndyCar career, sixth on the all-time list.

IndyCar’s next race will be at Phoenix, April 7.

(FORMULA 1)—Formula 1 kicks off its season in two weeks with the Grand Prix of Australia. Eight days of pre-season testing has been wrapped up at the Barcelona-Catalunya circuit in Spain.  The BBC’s chief F1 writer, Andrew Benson, says the American Haas-Racing car “raised eyebrows up and down the pit lane” with its speed. Kevin Magnusson’s top lap ranked Haas fifth among the ten teams that tested. 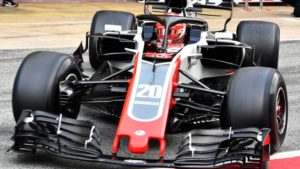 Magnusson was within 1.2 seconds of Sebastien Vettel’s Ferrari although Vettel topped the speed charts with softer tires. Haas gets engines and other assistance from Ferrari.

This is the third F1 season for Haas. Magnusson is joined by Romaine Grosjean, who has been with the team from the beginning.

Industrialist Gene Haas, who owns the team, also is co-owner of Stewart-Haas Motorsports in NASCAR, the team for which Kevin Harvick and Clint Bowyer drive.

Previous Post: « Mizzou’s Jordan Barnett arrested on suspicion of DWI
Next Post: #Mizzou will play Florida State at 8:45 p.m. on Friday. Jordan Barnett ruled out for that first game (VIDEO) »