The Missouri House has advanced a measure to tie wages for public works project more closely with the location where the work is being done. 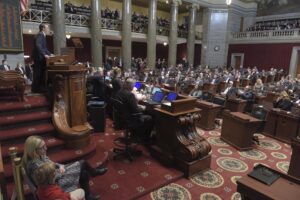 The proposal, which is a combination of three bills from Republican representatives, would impact employees on projects for cities, school districts, and local governments.  It would do away with the current “prevailing wage” policy that binds pay to wages reported by contractors.

The bill will require one more favorable vote before it can move to the Senate for consideration.

A sticking point with many Republicans which represent rural districts is that contractors don’t report their wages paid, and worker pay is then skewed toward urban areas where the cost of living and wages are much higher.

GOP House member Jeffery Justus of Branson, the chief sponsor of the combined legislation, thinks the existing arrangement needs to be repealed because it’s a drain on local tax dollars.

The measure, which has received initial approval in the Republican-dominated chamber by an 86-63 margin, would repeal the prevailing wage law and require contractors to pay employees the state or federal minimum wage, whichever is higher.  The minimum wage for public works projects is governed by the federal Davis-Bacon Act, which requires worker pay to be equal to similar contract work in a given region.

Proponents of the legislation, which include many cities and counties, claim the current law leads to money being siphoned from local jurisdictions to pay for high labor costs.  They say it artificially raises wages and makes public works projects cost prohibitive in rural areas, leading to the abandonment or neglect of important projects.

In Cole County, which is home to the state Capitol in Jefferson City, pay ranges from $14.35 per hour for a marble finisher, to $47.07 for an elevator constructor.  Many of the positions have basic hourly rates between $25.00 and $35.00.  Prevailing wage is determined by the Department of Labor and is based on the number of hours worked and the wages paid to contractors.

Democratic Representative Doug Beck of St. Louis thinks local communities would be better served if contractors were required to report their worker pay.

“It’s all voluntary,” says Beck.  “All the reporting on prevailing wage is voluntary.  And that’s the part of the problem I see.”

Opponents of the measure contend that if worker pay was reported then the prevailing wage would better reflect local economies and would be lower in rural areas.  Organized contractor associations and labor unions oppose the legislation to repeal the law.  Contractors like prevailing wage because it keeps skilled workers from taking jobs in other states.

Passing a prevailing wage rollback is a priority for the Republican supermajority legislature.  After years of frustration, the GOP passed a business-friendly Right-to-work proposal last year with a like-minded head of state, Governor Eric Greitens, signing the measure into law.

A prevailing wage bill passed the House in 2017 but stalled in the Senate, which became dysfunctional and consumed with GOP-infighting during the session.

Along with Representative Justus, two other Republican House members offered bills that were incorporated into the combined legislation – Holly Rehder of Sikeston and Warren Love of Osceola.