It was last Wednesday that the Missouri Senate took time to debate a plan that would require the governor to call a special election to fill a vacancy in the lieutenant governor’s office. 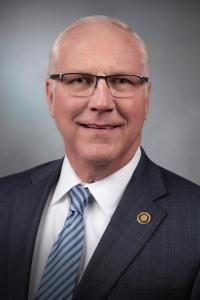 The discussion took place as calls for Governor Eric Greitens to resign were mounting and the state House was finalizing a committee to investigate his extramarital affair and related criminal charges.  If Greitens were to leave or be removed from office, Lieutenant Governor Mike Parsons would become Missouri’s governor.

The Senate didn’t take any action last Wednesday, although it was noted that right now the governor can’t appoint a replacement or call a special election if the lieutenant governor’s position is vacant.

Language establishing what to do if the number 2 position is unoccupied could slip into other bills currently in the legislature.  One of those measures, from Republican Senator Mike Cierpiot of Lee’s Summit, was heard in committee Tuesday.  His proposal would require the joint election of Missouri’s governor and lieutenant governor.

Right now, Missouri is one of 17 states in which the two seats run on separate tickets, according to data from the National Conference of State Legislatures.

But there’s momentum on moving to a joint ticket across the country as South Carolina becomes the 18th state to do so this year after a ballot measure was passed by voters in 2012.

Residents in Missouri will also have to weigh-in if a change is to be made in the Show-Me State.  Such alterations to the election process must be done through a constitutional amendment which requires a public vote.

The proposal from Senator Cierpoit would eliminate the primary election for the office of lieutenant governor.  Once a candidate for governor won a party primary, he or she would choose a lieutenant governor running mate and would have until the 11th Tuesday before the general election to certify that choice with the Secretary of State.

If a candidate failed to certify a running mate by such date, then the candidate would be deemed to have withdrawn from the governor’s race.

Beyond the 35 states that either have separate or joint elections for governor and lieutenant governor, 8 have separate primaries but are on the same ticket in the general election.

Currently, the state senate elects the lieutenant governor in Tennessee and West Virginia, while 5 states, Arizona, Maine, New Hampshire, Oregon, and Wyoming have no such position.

According to the National Lieutenant Governor’s Association, the secretary of state is first in line for succession to the governor in Arizona, Oregon, and Wyoming.  Four states have presiding officers of the Senate as successor – Maine, New Hampshire, Tennessee, and West Virginia.

The bill from Senator Cierpoit is accompanied by a Senate Joint Resolution, a requirement for legislation to qualify for consideration as a constitutional amendment.

A majority of members in both the House and Senate must approve a resolution; once passed, it goes on a statewide ballot for a public vote.  If a simple majority of residents approve it, the proposed amendment becomes part of the constitution.