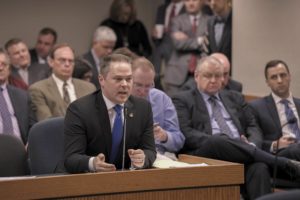 Haahr’s 429-page bill would put Missouri in line with some other states by indexing vehicle user fees to the cost of inflation.

The Springfield Republican notes the state’s current vehicle license and registration fees were put in statute in 1984, and haven’t changed in more than 30 years.

“This single change would generate approximately $175 million (in) additional money to the state’s road fund. Over a ten year period if we continue to index them it will generate approximately $2 billion for the state’s road fund. It would also provide in its first year alone almost $60 million in additional money to counties and localities for their local budgets,” Haahr testifies.

Haahr prefers driver’s license and registration fee increases rather than raising the state’s gasoline tax, which hasn’t been increased since 1996. He compares the gas tax to a relic and says it’s outdated.

The Missouri Limestone Producers Association also testifies for the bill, saying the Haahr transportation provision is a start for Missouri.

Meantime, two Democrats on the Ways and Means Committee have concerns about Haahr’s legislation, involving a program known as the “circuit breaker.”

Haahr’s proposal would prohibit the issuance of the senior citizens property tax credit, known as the circuit breaker, to renters.

“The circuit breaker tax credit was set up primarily to help people pay for their property taxes,” Haahr says.

State Rep. Richard Brown, D-Kansas City, says a lot of his disabled and elderly constituents rely on the circuit breaker.

Haahr tells Ellington and Brown that his tax reform legislation contains $40 million to fund the Missouri Senior Services Protection Fund, which he says would assist those residents.

“This bill offers no special giveaways but instead gives Missouri businesses a tax cut and incentivizes them to hire more Missouri workers to meet the workforce needs of our future,” says Haahr.

“This along with cutting spending and being fiscally responsible will help a lot of Missourians,” Schroer tells Haahr.

Democratic Representative Ellington tweeted at Missourinet Monday night, saying that Republicans are balancing the budget “off of the poor and elderly.”

Haahr told Missourinet after the hearing that he remains optimistic the bill will pass.