(NASCAR)—Kevin Harvick dominates the field for a second straight week to win his 100th race across NASCAR’s three touring series.  His win at Las Vegas is the 39th in his Cup Career.

Harvick led 214 of the 267 laps and led Kyle Busch across the line by more than 2.9 seconds.  Harvick won last weekend at Atlanta in another dominating performance.  He has led 392 of the 592 laps in the last two races. 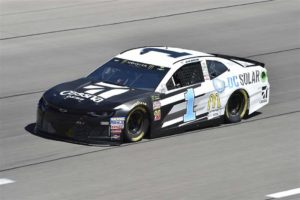 Joplin’s Jamie McMurray was running near the top ten when he hit the wall on lap 177, apparently after a right front tire went down.  The incident left him 36th in the 37-car field, the second straight race wigth fewer than the forty starters NASCAR hopes to have in its races.  The Atlanta race drew only  36.  McMurray’s first three races of the year have had finishes of 16-19-37, putting him in a points hole as he shoots for this fourth straight playoff appearance.

Clint Bowyer spent some time in the top ten before fading to 18th, two laps down.

(INDYCAR)—IndyCar drivers and teams have checked out the new aero kits and are waiting for the start of their season. It’s next weekend, on the streets of St. Petersburg, Florida.