South Carolina Women’s Basketball Coach Dawn Staley has filed a defamation lawsuit against Missouri Athletic Director Jim Sterk, for comments he made to Missourinet affiliate KTGR-AM during a phone interview, regarding the atmosphere at a Jan 28 game in Columbia, South Carolina.

Following the Tigers 64-54 loss to USC, Mizzou coach Robin Pingeton held a press conference that following Tuesday, Jan 30.  I asked her if she could confirm or was aware that they were complaints from her team that South Carolina fan spit at them.  Pingeton was guarded in her response, but conceded there were some questionable actions by fans attending the game.

Later that afternoon, Sterk appeared on KTGR-AM and was asked about the situation.  He was his response.

“It wasn’t a great atmosphere. It was really kind of unhealthy, if you will. We had our players spit on, and called the N-word and things like that. It was not a good environment and unfortunately, I think Coach Staley promoted that kind of atmosphere, and it’s unfortunate that she felt she had to do that.”

The lawsuit cites those comments as “false, defamatory, reckless and made with actual malice in the defendant knew that his statement was false and still made it with a reckless disregard for the truth.” 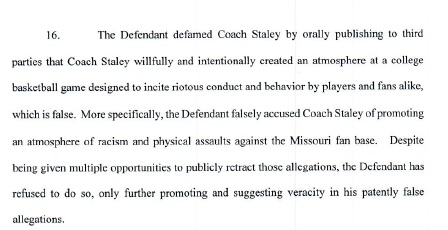 South Carolina Athletic Director Ray Tanner said his office conducted an investigation and found no evidence to back up the claims made by Sterk.

“I’ll just say, surrounding the situation that we’ve had to deal with the last few days, I was very confused.  I felt very strongly about what we stand for here at this university and women’s basketball, our fan base, our head coach, and the way we handle our business and have handled our business over the years.”

The SEC office met with each athletic department and on Feb 1, SEC Commissioner Greg Sankey released the following statement:

“I have had discussions with athletics directors at both institutions. Competition among SEC teams is highly intense but can never compromise the expectation of respect between our institutions. Coach Pingeton and Coach Staley have both worked tirelessly to build nationally-ranked teams comprised of outstanding student-athletes, and both teams should be celebrated for their success. I look forward to meeting in person with both athletic directors very soon to reaffirm these shared priorities and expectations.”

Missourinet has reached out to the University of Missouri for comment.