Third-graders in southwest Missouri’s Neosho are still selling raffle tickets for an AR-15 after the same type of weapon was used in a mass killing last week. 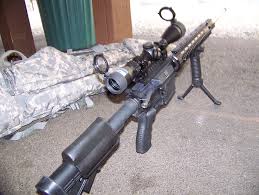 The Kansas City Star reports Levi Patterson, who coaches a 9-and-under baseball team, says the idea was conceived before the shooting in Broward County, Florida.

Patterson told the newspaper he considered finding a different raffle item after the Florida tragedy, but ultimately decided to “turn it into a positive thing”.

The Star reports a father of one of the players, who co-founded a retailer of the gun known as Black Rain Ordnance Inc., offered the weapon for the raffle.  Patterson told The Star he was not making a political statement with the raffle item, but it was just what had been offered by Black Rain.

Patterson responded to a group critical of the raffle on Facebook, saying none of the boys would be forced to sell tickets for the gun if they didn’t want to.

The Star reports the raffle is not affiliated with the Neosho School District, but the principal of an elementary school announced the drawing on her Facebook page hours after the Florida shooting and encouraged purchases.  The newspaper says the principal did not return its phone calls for an inquiry.

The Missouri AR-15 raffle is now being reported by news outlets around the country.  A Republican congressional candidate from Kansas, Tyler Tannahill, drew attention last week for offering an AR-15 giveaway as part of his campaign.