Twenty years after Dale Earnhardt Senior’s only Daytona 500 win, his iconic number 3 has won the Great American Race again—on a car driven by the grandson of Earnhardt’s longtime team owner.

Austin Dillon used a last-lap pass in overtime to finish a quarter-second ahead of Darrell Wallace Junior, the first full-time African-American driver in NASCAR’s top series since Wendell Scott, forty-seven years ago.

Dillon bumped his way past A. J. Almendinger on the last lap. Almendinger went into the wall but was able to drive his car across the finish line in tenth place, the last car on the lead lap. Dillon’s grandfather and car owner, Richard Childress, allowed Dillon to start using Earnhardt’s number in 2014.  It had not been used since Earnhard’s death on the last turn of the 2001 Daytona 500.  Childress had carried the number during his driving career, 1976-1981.

Although twenty-five cars are listed as “running” at the finish, most of those from eleventh to twenty-fifth had been damaged in one of the three multi-car crashes. 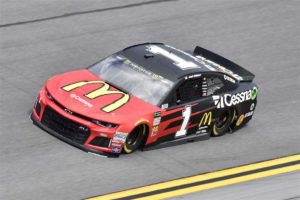 Missouri’s only native NASCAR driver, Jamie McMurray, was caught in one of the early, small crashes when Kyle Busch cut a tire.  McMurray finished sixteenth, two laps down.   Busch was the last car still running at the end. He finished twenty-fifth, seven laps behind Dillon.

(FORMULA 1)—Formula 1 opens its season March 25 with the Grand Prix of Australia in Melbourne.  F1 has tweaked its body designs a little this year with new rear spoiler limits.  But the most noticeable change in the cars in in driver protection 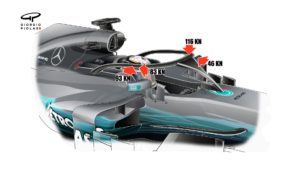 It’s called a halo device that is designed to keep debris from striking the driver. A Mercedes spokesman says the addition of the titanium device has forced manufacturers to strengthen the chassis of their cars to the point that the halo can “take roughly the weight of a London bus.”

Driver protection has been a growing concern in F1 and IndyCar for several years, beginning with the 2009 death of Henry Surtees when hit by a loose wheel in a Formula 2 race.  A few days later, F1 driver Felipe Massa barely escaped being killed when he was hit in the head by a loose spring from another car.  Three years ago, IndyCar driver Justin Wilson—who had driven previously in F1—was killed by a flying piece of debris that struck him in the head.

(IndyCar)—IndyCar competition begins March 11 on the streets of St. Petersburg, Florida with some new teams lining up for fulltime or part-time participation that has the series holding a stronger outlook than it has had for some time.  A full field already is expected for the Indianapolis 500 in May; usually there has been concern at season-start that there would be thirty-three cars entered. This year, there might be at least thirty-four, one of which will be Danica Patrick’s ride with Ed Carpenter Motorsports, the last race of her two-race farewell tour (she was taken out of the Daytona 500 by a crash and finished  35th). 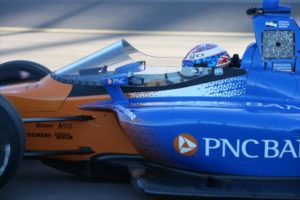 IndyCar also is looking at driver protection but is taking a different approach from the halo device in Formula 1.  Scott Dixon tested a windscreen prototype at Phoenix and approved the concept. He ran tests in varying light conditions and said, “Everything looks very good.”

IndyCar Competitions President Jay Frye, a former University of Missouri football player, says revisions will be made based on Dixon’s experiences at Phoenix. There’s no timetable for implementation.