You are here: Home / Business / The number of Missouri students enrolled at the University of Arkansas has doubled in ten years

A Missouri lawmaker says the University of Arkansas is recruiting more students in the Kansas City area. 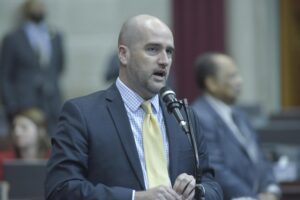 State Rep. Greg Razer speaks on the Missouri House floor in May 2017 (photo courtesy of Tim Bommel at House Communications)

Missouri is part of the compact.

“When you (Commissioner Mulligan) listed off the states and the institutions that are part of this, Arkansas was not one of them. And in Kansas City, they are taking a lot of our students,” Razer says.

The number of undergraduate students from the Show-Me State who are enrolled at the University of Arkansas in Fayetteville has more than doubled in the past ten years, jumping from 618 in 2007 to 1,436 in 2017.

Voorhies did not have numbers by region, so it’s unclear how many of the 1,436 students in 2017 were from Kansas City.

Commissioner Mulligan also addressed the topic during her testimony this week at the same hearing Razer spoke at.

“I think there’s a misperception that states like Arkansas are doing these really aggressive marketing campaigns,” Mulligan testifies. “It’s actually institutions within Arkansas. So the University of Arkansas, for example, has made the decision to really go after top-achieving students.”

Mulligan tells lawmakers that the level of state funding an institution receives affects their ability to attract and retain students.

The University of Arkansas website also indicates they are recruiting heavily in Texas.

The website shows that the number of undergraduates from Texas who are attending the University of Arkansas climbed from 1,376 in 2007 to 5,570 in 2017.

Missouri Governor Eric Greitens’ (R) proposed budget would decrease the Department of Higher Education’s budget by about $96 million, according to numbers provided by the Office of Administration (OA).