(This story is written by Missourinet Capitol correspondent Waverly Colville)

The dicamba drift that has plagued crops has the Missouri Department of Agriculture (MDA) running short on staff members. 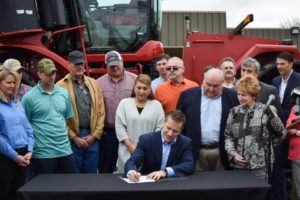 This weed-killer can spread to non-resistant crops, and has impacted more than 300,000 acres of Missouri farmland.

MDA budget and planning director Robin Perso testified this week before the Missouri House Budget Committee in Jefferson City. Perso testifies the number of investigators needs to be expanded.

“We get about 80 of those (dicamba) complaints per year,” Perso says. “The last two years we’ve had an uptick. In fiscal year ’16 running into ’17 just in the season, spring season, we received 130 complaints of dicamba misuse, primarily in the Bootheel.”

Perso says that number increased to 315 complaints in 2017.

He testifies MDA currently has eight field staff to handle four years of work in one year.

Although Perso isn’t sure on an exact number needed, he testifies that if there were another six or seven investigators, it would make a big difference.

Missouri Governor Eric Greitens (R) signed bipartisan legislation into law in 2017, which increased the penalties for illegal use of herbicides.

Greitens signed that bill in the town of Portageville, which was impacted.

During the bill-signing ceremony, Greitens noted that the illegal use of pesticides had destroyed farmers’ crops and had started to tear communities apart.

The 2017 bill signed by Greitens authorized MDA to issue a $10,000 penalty per violation. Chronic violators can now be fined up to $25,000 per violation.