You are here: Home / Business / Transportation is a top priority for Missouri Municipal League (AUDIO)

Legislation to increase Missouri’s gasoline tax for transportation has the backing of the Municipal League. 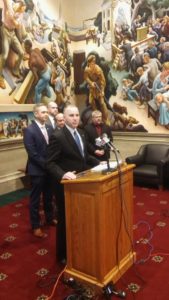 The Missouri Municipal League (MML) represents about 650 municipalities across the state.

Corlew tells the audience he believes the Missouri House has the votes to send the gas tax increase to the Senate.

If both chambers approve it, it would be placed on the statewide ballot in either August or November.

Corlew also addressed the aging Buck O’Neil bridge over the Missouri River in Kansas City, which was built in 1956.

Corlew says the bridge needs to be replaced.

“It’s a safety concern that if we don’t fix it, we could have a catastrophe,” Corlew says. “And we need to get that fixed. Ultimately we need to replace it.”

Corlew notes that takes funding. Missouri’s gasoline and diesel taxes have been at 17-cents a gallon since 1996.

The “Kansas City Star” reports the Missouri Department of Transportation (MoDOT) and Kansas City officials have agreed to a $6 million repair, to address the bridge’s most urgent problems.

The newspaper reports about 40,000 vehicles make the daily trip across the bridge.

Chairman Corlew also addressed the issue of inflation during his presentation on Tuesday.

Corlew tells the audience Missouri’s fuel tax is not indexed with inflation.

The task force report reads, in part: “Over the past 20 years, inflation has eroded the purchasing power of the 17-cent excise motor fuel tax to eight cents today.”

“If you were to take an inflationary calculator and say what would I need today to make the equivalent of 17 cents in ’96, you’d find that it’s 27 cents,” Corlew tells Missourinet.

Senator Schatz asks mayors to call their state senators and state representatives about transportation. He notes it’s an election year, implying that some lawmakers are worried about voting to raise taxes.

Schatz tells the audience MoDOT crews were out for two full days this past weekend, battling ice and snow. He warns that unless MoDOT receives more funding, Missourians won’t receive that level of service in the future.

While Governor Greitens told reporters last week in Jefferson City that he does not support a gasoline tax increase this year, Corlew says Greitens has worked with lawmakers on transportation.

Corlew also notes that if the gasoline tax increase passes the House and Senate, it would go directly to Missourians in a statewide vote.

Meantime, a bipartisan group of mayors is urging Missourians to support the buckle up/phone down initiative.

The campaign is aimed at combating distracted driving and promoting seat belt use.

The Missouri transportation task force’s January report recommends a ban on texting while driving and a primary seat belt law.

Click here to listen to the full interview between Missourinet’s Brian Hauswirth and State Rep. Kevin Corlew, R-Kansas City, which was recorded on February 13, 2018 at Jefferson City’s Capitol Plaza Hotel: