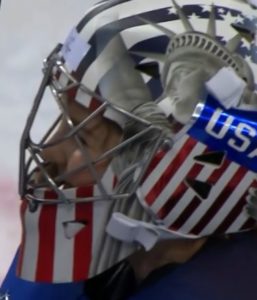 One Missouri tie to the Olympics is women’s hockey goalie Nicole Hensley.  She played her college hockey at Lindenwood in St. Charles, Mo.  She created some off-ice controversy when the requested that the logo of the Statue of Liberty be removed from the side of her mask because no item, slogan or words can be shown related to National identity.  USA hockey reported prior to their second game that the logo will be allowed.

Hensley wore the mask this morning and made her Olympic debut in Team USA’s 5-0 win over the Olympic Athletes from Russia.  The U.S. outshot the Russians 50-13 with Hensley turning aside all Russian chances.

The U.S. will wrap up pool play against Canada.  Both teams are 2-0 and are expected to face each other for the gold medal.