(This story is written by Missourinet Capitol contributor Waverly Colville)

Missouri’s Safe at Home address protection program would be expanded to include victims of additional crimes, under a proposal from State Sen. Caleb Rowden, R-Columbia. 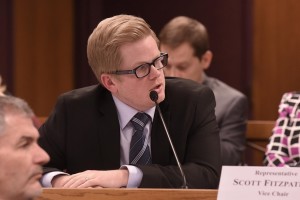 The program currently allows victims of domestic assault, rape, sexual assault, human trafficking or stalking to use a P.O. box instead of their home address in public records if they feel endangered.

Their mail then gets forwarded to them through the Missouri Secretary of State’s office.

Rowden’s legislation would expand this program to people who are victims of any type of crime who feel their location puts them at risk.

“If you’re the victim of any crime and you fear for your safety, even if it’s outside the scope of this, we don’t want to put up a barrier for you to access this program,” Rowden, R-Columbia, told the Missouri Senate Seniors, Families and Children Committee on Wednesday in Jefferson City.

The bill also allows this program to be expanded to others, such as a parent of a minor withholding their address from a parent who has been denied custody or visitation rights.

An applicant may complete their own renewal application for the program whereas before, it was required to first meet with an “application assistant.”

“It’s a great program,” Rowden testifies. “We’re just making some tweaks to hopefully make the program better and more broad for as many victims who fear for their safety in our state as possible.”

Several people testified for the bill, including representatives from the Secretary of State’s office, Missouri Coalition Against Domestic and Sexual Violence and the Missouri Association of Prosecuting Attorneys.

“It’s a very simple concept, but it has a very big impact for the families that need it,” says Brenda Sites, the Safe at Home program manager.

The program has served more than 4,200 Missourians since it began in 2007, Sites says. There are currently about 1,600 people in the program, which breaks down to 730 households.

Jennifer Carter Dochler, public policy director for the Missouri Coalition Against Domestic and Sexual Violence, also says the organization is supportive of the bill because as her organization traveled throughout the state training volunteers, child custody cases were a concern.

“I’ve personally talked to a number of survivors who talk about how safe they feel being a participant,” Dochler said. “This legislation we’re very supportive of, particularly regarding the enhancements on how courts should handle child custody cases.”

However, Jean Maneke, counsel to the Missouri Press Association, said she understands a victim’s need for safety, but also said the public has the right to know certain details.

“When the (suspect) is incarcerated already, it doesn’t make as much sense,” Maneke said. “It’s a balancing act. The public has an interest in watching for crime and knowing that crime is going on, but I also understand the victims’ interest in protecting themselves and their safety when the suspect is still at large.”

The committee did not vote on the bill on Wednesday.