The lawyer for the ex-husband of a woman who engaged in an extra-marital affair with Governor Eric Greitens says his client has been subpoenaed by a grand jury. 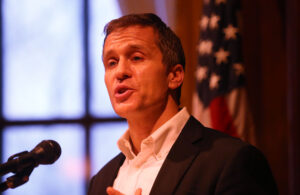 Published reports, including in the St. Louis Post-Dispatch, the Springfield News-Leader and the Associated Press, confirm that attorney Albert Watkins disclosed the legal undertaking Monday.

Those published reports note St. Louis Circuit Attorney Kimberly Gardner, who is investigating blackmail allegations against Greitens, would not elaborate on the presence of a grand jury.

Greitens has admitted to the extra-marital relationship before becoming governor in 2015, but has vehemently denied any legal wrongdoing.

A TV report in January included audio from a recording the ex-husband secretly made in which his former wife described being bound, partially nude by Greitens, who then took a photo which he threatened to distribute if she outed their relationship.

The names of the woman formerly involved with Greitens and her ex-husband have not been publicly revealed.

CNN reported in late January that Watkins, the ex-husband’s attorney, was also retained by Eli Karabell, a person who once volunteered to help the Greitens transition team after the 2016 election, but who has since directed a number of contentious tweets toward Greitens office.  Watkins confirmed to CNN that Karabell was interviewed by the FBI in November 2017.

A number of state lawmakers, including five fellow Republicans, have called on Governor Greitens, a former Navy SEAL and Rhodes Scholar, to resign from office. The governor has said the extra-marital relationship is a personal matter that he and his wife worked through at the time in 2015.

A grand jury has the legal authority to investigate potential criminal conduct, and determine whether criminal charges should be brought.  It’s normally made up of more 20 people who may have jury duty for months at a time.