You are here: Home / Business / Matthiesen: West Lake “is the number one issue to the people of Bridgeton, Missouri” (AUDIO) 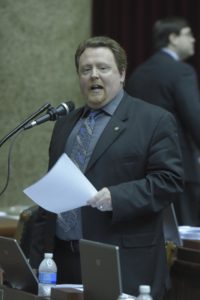 Pruitt says the plan, which is called “Excavation Plus”, will excavate and will remove within five years all of the radioactive material that poses a risk to public health.

“The cleanup right now looks like about 70%, if not more, of the radioactive material will be cleaned up from that landfill,” Matthiesen says.

Matthiesen tells Missourinet Pruitt is dedicated to protecting Missourians from the radioactive waste.

“They (EPA) absolutely validated every point that we had that the groundwater is contaminated there,” says Matthiesen. “That there’s more radioactive material there than was initially thought.”

The “St. Louis Post-Dispatch” reports radioactive waste was dumped illegally at West Lake in the early 1970s. It says the landfill contamination is traced through the development of nuclear weapons during World War II’s Manhattan Project near Interstate 270.

Matthiesen goes on to say that he’s still worried about possible contamination in nearby neighborhoods.

“This is the number one issue to the people of Bridgeton, Missouri, of Maryland Heights,” Matthiesen says. “We just want to know that we’re living in a safe, clean environment. We want to know that our groundwater is not going to be contaminated.”

Under the bill, DNR would work with local officials to collect at least 500 samples within a one-mile radius, that would provide conclusive evidence to determine if the area is contaminated.

Matthiesen made the announcement about West Lake landfill on the Missouri House floor after the meeting on Thursday, receiving bipartisan applause.

Pruitt’s plan also calls for a permanent cap to be put in place that would provide additional protection to the community over the long-term. EPA says the estimated cost of the proposed plan would be $236 million.

“As the first member of Congress to call for the removal of nuclear waste from West Lake landfill, today’s announcement by the EPA of a cleanup is a huge victory for our long-suffering community and it is a major step towards long-delayed environmental justice,” Clay’s statement says.

The EPA website says that “since 1980, EPA’s Superfund program has helped protect human health and the environment by managing the cleanup of the nation’s worst hazardous waste sites and responding to local and nationally significant and environmental emergencies.”

The EPA website also notes that in 1983, the agency permanently relocated more than 500 residents of the eastern Missouri community of Times Beach, because of widespread dioxin contamination.

Click here to listen to the full interview between Missourinet’s Brian Hauswirth and State Rep. Mark Matthiesen, which was recorded at the Missouri Capitol in Jefferson City on February 1, 2018: