The Missouri Senate has declined to take action on three of Republican Governor Eric Greitens’ appointees to a commission that resigned their posts sometime Wednesday or Thursday. 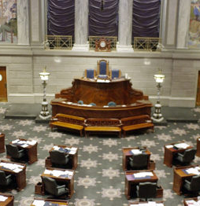 The three had been assigned to a housing commission shortly before the Governor led them on a controversial vote to end tax credits for developers of low-income housing.

“We did not give approval or acceptance to those letters of resignation, and we did not vote give these nominees back to the governor,” said Romine.  “So, these folks have been banned for life.  They’ve gone through a process that should never have happened.  The Governor has got to follow the process, which is appointees are made, the Senate has an opportunity to confirm, and then we conduct business as we should.”

Many Senators believe the Governor will try to supersede the Senate’s constitutionally specified “consent and oversight” of his appointments by reappointing them once the legislature adjourns in May.  Thursday, a number of Senators speculated that such a move by Greitens would trigger a court battle.

Republican Senator Rob Schaaf criticized an email from Greitens earlier in the day which said no further action was needed over the resigned commissioners.

“I think what you saw today was the Senate stand up for the Senate,” said Schaaf.  “And you saw the governor run away from the battlefield and leave his three soldiers behind to die.”

Several Senators, including Schaaf, kept the chamber in session for eight hours Wednesday night as they debated whether to send the names of the commissioners back to Greitens or hold the names.  If the names would’ve been sent back to Greitens, he would be able to appoint them again after the end the legislative session without Senate approval.

As the chamber decided to take no action Thursday and adjourn for the week, the commissioners will be banned from future service after a Saturday deadline is reached.

Greitens has routinely replaced board and commission members, sometimes his own appointees, who have shown resistance to voting in the direction he favors.  He made 10 appointees to the state Board of Education in short order last year until he found five that would comply with his desire to have Education Commissioner Margie Vandeven fired.

Those five members have not been confirmed by a Senate that largely opposes the governor’s actions, leaving the board short of the required number of members to conduct business.  Under current law, Greitens can appoint new members after the Senate adjourns in May, who could participate in the Board of Education’s next scheduled meeting in June.

Senator Romine filed a bill in the current legislative session, SB 794, to place restrictions on how the governor appoints and replaces members of boards.

It requires the governor to inform the Missouri Senate, in writing, of any appointments to state boards or commissions made while the legislature is not in session.  Once an appointee is designated, the Governor is prohibited from withdrawing or rescinding the appointment, unless the appointee is involved in wrongdoing.

The measure also requires that a majority of board members have Senate confirmation in order to conduct business.  Romine said Thursday that the legislation would be heard in a committee in the upcoming week.

Schaaf, noting he and Governor are members of the same party, thinks the governor has wildly abused his authority to engineer voting outcomes he favors.

“I could never envision myself wanting to fight an appointment of a Republican governor,” Schaff said.  “But I also could not envision that the governor would use his appointment ability, the way he does, to dominate boards and commissions.”