Missouri Attorney General Josh Hawley has blamed the human trafficking problem on the sexual revolution of the 1960’s and 70’s in America. 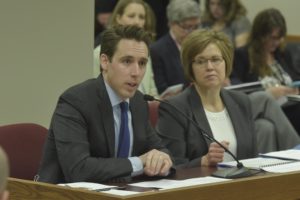 The Kansas City Star has released portions of an audio recording of a speech Hawley gave to a group of pastors in December.  In it, he said, “we’re living with the terrible after effects of this so-called revolution…and one of those affects is the crisis in our country that goes by the name of human trafficking”.

During his address, Hawley went on to say, “The sexual revolution has led to exploitation of women on a scale that we would never have imagined, never have imagined”.  Hawley has identified the fight against human trafficking as one of his signature issues as Missouri’s Attorney General.

The Star reported that the audio it obtained was recorded during a speech Hawley gave last month at a “Pastors and Pews” event in Kansas City hosted by the Missouri Renewal Project.

Hawley is favored to win the Republican nomination to run for the Missouri U.S. Senate seat currently held by Democrat Claire McCaskill later this year.

The Star’s report of Hawley’s comments come roughly a week after another Republican candidate for McCaskill’s Senate seat, Courtland Sykes, caused a brief national stir with comments posted on his Facebook page in which he called feminists “she devils” with “snake filled heads”.