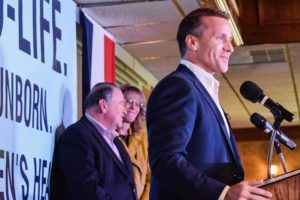 The Governor is making a series of stops over two days to promote his proposal which he says will results in tax cuts for 97% of Missouri taxpayers.

The top tax bracket, which applies to anyone who earns more than $9,072 annually, would be dropped from 5.9%-to-5.3%.  At a stop in northern Missouri’s Macon, Greitens said 380,000 Missourians would have their income taxes completely eliminated.

While he didn’t detail the process for determining who those people are, he offered an example of a married couple with two kids that would have their $348 state tax reduced to zero.

Greitens’ proposal also calls for people who receive the federal Earned Income Tax Credit to get an amount equal to 20% of their federal deduction applied to their state tax bill.  Under the arrangement which Greitens refers to as the “Workers First” tax plan, those savings would top out at $5,000 for single filers and $6,000 for joint filers.

The governor’s proposal would further cut the state’s corporate income tax from 6.25% to 4.25%, giving Missouri the second lowest rate of the 44 states that have corporate taxes.  Only North Carolina would have a lower corporate tax rate at 4%.

Greitens is also promising that his proposal will be revenue neutral, meaning the tax cuts won’t leave the state with a deficit.  He’s offering numerous changes to the state tax code which would generate revenue to offset the tax cuts.

First, the 2% discount businesses receive for filing withholding taxes on time would be eliminated.

Secondly, corporations would be required to use the Single Sales Factor.  Currently, Missouri allows all multi-state corporations to lower their taxes in the Show-Me state by letting them figure in in-state capital spending, payroll and sales.

Corporations that have larger workforces and investments in other states end up paying lower taxes in Missouri.  Requiring the Single Sales Factor calculation would eliminate the deviation.

Further, individual filers would see a reduction in to percentage of the federal income tax deduction they can claim on their state taxes.  Currently, the state deduction is tied to the federal rate for filers who don’t itemize their taxes.

The recent tax plan passed by Congress doubled the federal rate from roughly 6%-to-12%.  Governor Greitens is proposing to gradually reduce the percentage Missourians can claim, based on income.

Finally, the governor is proposing that Missouri join 24 states in the Streamlined Sales and Use Tax Agreement which seeks to collect taxes on internet sales from out of state businesses.

Greitens offered no dollar amount that any of his changes to the tax code would generate to offset the tax cuts in his proposal.

The Missouri Budget Project, which has been critical of Governor Greitens budget moves in the past, released a statement saying it’s encouraged by his latest proposal.

“There are a handful of positive steps we can take within this tax proposal, like the Working Family Tax Credit, but also some provisions we believe are unnecessary and counterproductive,” said Amy Blouin, Executive Director of the Missouri Budget Project.

Democratic House Minority Floor Leader Gail McCann Beatty said the plan would only serve to “make the state’s financial crisis far worse than it already is”.

The Governor made stops in Macon, Palmyra and Jackson Monday to promote his tax plan, and has appearances lined up Tuesday in Springfield, Joplin and Kansas City. He was joined in Macon by Joel Walters, the Director of Revenue in Missouri.

The proposal from Greitens, a Republican, comes just as two tax packages are being looked at in the GOP dominated state Senate.  A plan from Senator Andrew Koenig of Manchester would, like the governor’s offering, lower the corporate income tax to 4.25%.  A proposal by Senator Bill Eigel of Weldon Spring also shares some of the provisions in Greitens’ plan.