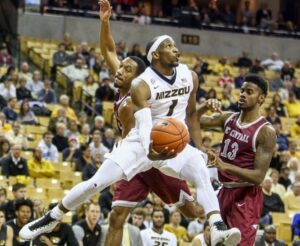 A thin position for the Mizzou basketball team became even thinner Friday night.

In a statement released by Missouri men’s basketball, point guard Terrence Phillips has been suspended “indefinitely for a violation of team policy.”

The release went on to say, “Phillips’ future status with the program will be determined in coordination with campus and department leadership.”

No reason for the suspension was given by the University. Missouri will have only eight scholorship players availabe, and just one scholarship point guard — Jordan Geist — for Saturday’s game against Mississippi State in Starkville, Miss.