The U.S. Senate is expected to vote today on a three-week funding resolution that would reopen the federal government for business. Republicans and Democrats have been clashing over items to include in the measure. Democrats want protection from deportation of more than 700,000 undocumented immigrants who came to America as children. Republicans want increased military funding, changes to immigration laws and funding for border security, including the wall at the U.S.-Mexico border.

U.S. Senator Roy Blunt, R-Missouri, tells Fox News Democrats should not be trying to resolve other issues through government spending.

“The number one responsibility of the federal government is to defend the country. With our important leadership in the world, it’s also to help do what we can to maintain a peaceful world. We’re not prepared to do that,” says Blunt. “We are asking young men and women to step forward and defend us without giving them what they need. We should never want an American service person to be in a fair fight. We want them to have every possible advantage and they are clearly moving away from that long advantage that they’ve had.”

“We need to get back to where we openly debate these appropriations bills and get them to the president’s desk one or two at a time, rather than every year have this issue that frankly empowers the minority leader in ways that shouldn’t happen,” says Blunt.

“We are in our third continuing resolution. That’s killing not only the military, it’s everybody else. Every time we do a continuing resolution, it means we continue the previous year’s funding level. That doesn’t factor in the cost of living,” says Cleaver. “It’s not indexed to anything. So, every time we pass a continuing resolution, it means there’s no funding increase for the military or anybody else. We need to figure out a way in which we can look at this as a time to put all of our energy into passing a budget. A budget. The most powerful nation on the planet has not had a budget in three years. That is insulting to the American public and everybody ought to be embarrassed who raised their hands and took the oath of office.”

Cleaver says the partisan blaming must end and lawmakers should work together.

“If you give me six Republicans and I’ll take six Democrats, they don’t even have to be in leadership, we’ll go in the bathroom and I think we can solve this matter. What we have right now is people in there fighting each other, trying to see who can better politicize this issue. It’s not helpful to the people in this country,” says Cleaver. 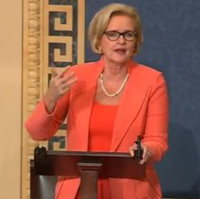 On Friday, U.S. Senator Claire McCaskill, D-Missouri, was one of five red-state Democrats who voted in favor of keeping the government open. During the early hours of Saturday, McCaskill also moved for immediate Senate approval of a measure that would guarantee members of the military their pay, on time, and guarantee continued military death benefits during the shutdown. Senate Majority Leader Mitch McConnell, R-Kentucky, objected – leading to the proposal’s defeat.

McCaskill, a member of the U.S. Senate Armed Services Committee, says she is also donating her pay to charity and Eastern Missouri Republican Congresswoman Ann Wagner says she has requested to have her pay withheld during the shutdown. Southeast Missouri Republican Congressman Jason Smith says he will donate his pay to Missouri charities in his district while the government is closed.