You are here: Home / Crime / Courts / CNN reports FBI interest in Missouri Governor as does State Senator, Greitens doubles down on denial

The FBI appears to be conducting some level of investigation into Governor Eric Greitens.  CNN reported Friday night that two U.S. officials confirmed the federal agency is looking into blackmail allegations leveled at the Governor. 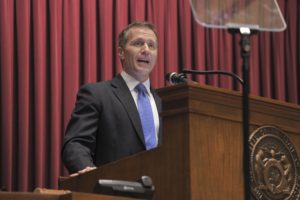 James Bennett, Greitens’ lawyer, told CNN the governor has not been contacted by the FBI and said “we are not aware of any interest by the FBI in this personal matter that took place years ago”.

CNN also reported they were approached by Eli Karabell, a person who once volunteered to help the Greitens transition team after the 2016 election, who said he was interviewed by the FBI in November 2017.

Karabell has since directed a number of contentious tweets toward Greitens office.  Karabell retained the same attorney, Al Watkins, that represents the ex-husband of the woman who had the affair with Greitens, and indicated he attempted to blackmail her.

In a story reported by a St. Louis TV station, the ex-husband offered a secret recording he made of his former wife, in which she described how Greitens snapped a photo of her while she was tied up, partially naked and blindfolded, and threatened to use it against her if she mentioned his name.

CNN reported that Watkins confirmed the FBI had interviewed Karabell.

The network declined a request by Greitens’ attorney, Bennett, to detract its story.

The FBI, as part of a longstanding policy, declined to confirm or deny to CNN whether it was investigating Greitens.  The cable network said it could not determine what the focus of the agency’s investigation was.

Bennett said the governor’s office was not aware of any interest by the FBI in matters unrelated to the affair.

Meanwhile, Republican State Senator Rob Schaaf of St. Joseph told the St. Louis Post Dispatch Saturday that he’d had conversations with the FBI regarding the governor’s reliance on “dark money” and a $500,000 donation his campaign received from a mega-donor shortly after being elected.

Schaaf told the newspaper that his conversation was not a formal interview, but an effort by the agency to gather background information.  The donation in question came from Joplin businessman David Humphries.

Greitens endorsed legislation in the 2017 session favored by Humphries to relax liabilities businesses face in litigation.  Humphries company, Tamko, is being sued for selling defective products.

Greitens himself granted his first interview since revelations of an extra marital affair and blackmail allegation surfaced following his January 11th State of the State address.

The Governor told the AP Saturday he has no plan to resign from office after five Republican lawmakers called on him to do so.  He also reiterated the claims he’d previously made on Facebook that his affair was consensual and that the blackmail allegations were unfounded.

The AP reported that Greitens did not directly say “yes” or “no” when asked if he had bound and blindfolded, and taken a photo of the woman.

The wire service said he firmly denied that he had attempted to coerce the woman, or that he or anyone associated with him had paid her to be silent.  The AP also reported that Greitens denied having slapped the woman.

St. Louis Circuit Attorney Kim Gardner announced last week that she is conducting a criminal investigation into claims about Greitens’ activity with the so far unnamed woman, which is alleged to have taken place in 2015, well before Greitens was elected.  Gardner is a former Democratic state lawmaker.