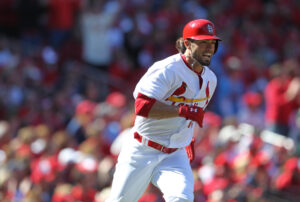 Grichuk is coming off a disappointing 2017 season in which he hit .238 with 133 strikeouts in 122 games.  Even with the low average, he still hit 22 home runs and 25 doubles. The 26-year-old fell to the fourth outfielder on the Cardinals’ depth chart this winter following the offseason acquisition of Marcell Ozuna.