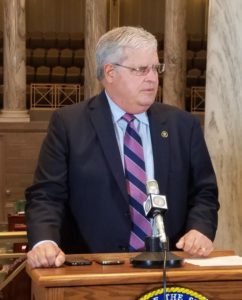 “I suspect they (nominations) will be killed. I’ve already been told they’ll be killed but I’m going to let that happen. If these Senators change their minds, fine. If they don’t, then they’ll be banned for life. I’ve tried to keep that from happening,” says Richard. “I’ve asked for a new panel, but haven’t been lucky with that.”

Earlier this month, Richard was undecided about holding hearings for the nominees because of the governor appointing five candidates who quickly voted to dismiss Margie Vandeven as education commissioner – before the Senate had a chance to confirm the appointees.

“I’ve taken exception to all governors, Republican and Democrat, pushing in on the legislative business of the Senate and the House,” said Richard. “Don’t ever take out my ability to do business and protect the Senate. I’m not going to say no, no, no. There may be some Senators that want to have a debate on the floor about some of these. I’m open to that too. It’s just that I want to protect our ability to advise and consent. I want to make sure this institution is respected for what we do legislatively.”

The governor’s months of planning the move drove a wedge between the governor, the education community and some lawmakers. Some Senators in the governor’s own party have threatened to block his nominees – prompting Greitens to use a tactic that gives the Senate until the end of the session to consider his appointments.