A Missouri political scientist thinks Governor Eric Greitens’ political career will survive, despite allegations of blackmail and the rise of the #MeToo era. Dozens of sexual harassment claims against powerful men in politics, news and Hollywood have sparked an outpouring of support for the women who have broken their silence – creating the #MeToo age that tells America and the world that such inappropriate behavior will not be tolerated.

Robynn Kuhlmann with the University of Central Missouri says affairs by former President Bill Clinton and Louisiana U.S. Senator David Vitter did not cost them their political seats and she doesn’t think the accusations against Greitens will either. 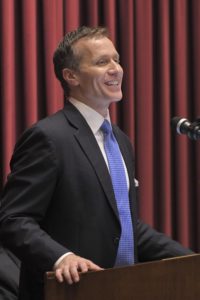 “I don’t think that the situation the governor is in right now is so politically-damaging that he would have to resign and he wouldn’t be able to show his face in politics again,” says Kuhlmann. “Don’t get me wrong, what complicates the matter is this allegation of blackmail, but there seems to be far worse situations that others have been able to keep their political office.”

The 42nd U.S. President, Democrat Bill Clinton, successfully dodged impeachment in 1999 for perjury and obstruction of justice allegations involving a sexual harassment lawsuit filed by Paula Jones. She claimed Clinton harassed her while he was governor of Arkansas. Then there are details of the affair between Clinton and a former Department of Defense intern, Monica Lewinsky, that were plastered all over the national media circuit during Clinton’s time in office.

Greitens has acknowledged that he had an affair with his hairdresser in 2015 but has denied any criminal allegations. St. Louis Circuit Attorney and former Democratic State Rep. Kim Gardner is investigating the blackmail accusation against Greitens.

Some Missouri legislative members say Greitens has created an obstacle to get their work done this session. Kuhlmann says the noise will hurt the governor’s office, but the GOP-controlled legislature can move forward.

“The governor’s agenda and the agenda of the majority party in power align quite well. So, I don’t necessarily see legislation that the Republican Party wants to get through actually having many obstacles,” says Kuhlmann.

Proposed changes to tax and labor policies, further restrictions on the state’s legal system and limits on what gifts lobbyists can offer to lawmakers are expected to be among the GOP priorities this session.