A Lawyer for Republican Governor Eric Greitens blames Democratic operatives for outing an extra marital affair on the part of the governor as well as blackmail allegations against him. 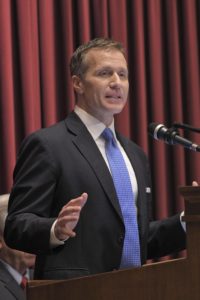 Greitens added comments from attorney Jim Bennett to a post on his Facebook page yesterday, where Bennett said news reporting has revealed that a former Democrat state party chairman was driving press coverage.

Bennett said the former chairman had not spoken to the person in question, presumably the woman Greitens was having relations with.

The unnamed woman, who was being secretly recorded by her ex-husband, indicated that Greitens blindfolded her, tied her to pull-up rings while she was partially naked, snapped a photo, and then threatened to distribute the photo if she mentioned his name.

Former Missouri Democratic Party chairman Roy Temple told The Associated Press that he met with the woman’s ex-husband several times in September 2016. But when the man ultimately decided he didn’t want to go public, Temple says he agreed not to publicize the affair.

Temple told The Associated Press he has not spoken to the ex-husband since then.  Bennett, Greitens attorney, called the course of events a “political hit piece”.

In a statement to the St. Louis Post-Dispatch, Bennett said “No violence. No picture taken. No threat of blackmail.”  In the post on Greitens Facebook page, he said “This is and remains an almost three-year-old private matter with no matter of public interest at stake”.

The unnamed woman has not made a public statement about the incident she surreptitiously described to her ex-husband.  The ex-husband did not break any law in secretly recording her, as Missouri has a “one party consent law”.

If Greitens made a threat, it’s not certain whether he broke the law.  State Attorney General Josh Hawley has declined to investigate the matter under jurisdictional grounds. St. Louis Circuit Attorney Kim Gardner announced Thursday her office would launch a formal investigation into the allegations of blackmail.

Bennett said in another statement, “The Governor is very confident he will be cleared in any investigation”.

Republican State Senator Gary Romine says action, including possible impeachment proceedings, will take place if the allegations against Greitens are proven to be true.

“If the blackmail or any of the criminal activities are deemed to be true, then the governor will be asked to resign,” said Romine.  “And if he refuses, then we would be calling for the impeachment process.  “Although that needs to start in the House, it would be something I would ask for.”

The Associated Press reports that an attorney for the woman’s ex-husband says he has been interviewed multiple times by the FBI. An FBI spokeswoman declined comment.