He plans to spend more time going four or five miles an hour, or less, again this year.  But he has an itch to have a faster life in the dirt after a year adjusting to not thinking every day about getting ready for the next race, the next test session, the next sponsor appearance, the next autograph session. 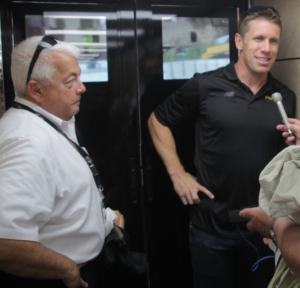 He hasn’t needed his trusty sidekick, Randy Fuller, keeping him on his crowded schedule thirty-eight weeks a year at race tracks from coast to coast or reminding him away from the tracks that he wasn’t away NASCAR racing.  They still work together but it is unlikely that Randy tells Carl it’s time to plow.

Edwards was inducted into his first hall of fame since leaving big-time NASCAR racing a few days ago, the Ozarks Area Racers Foundation Hall of Fame in Springfield. In his younger barnstorming days, Edwards ran a lot of races at Lebanon’s I-44 Speedway.  He ran a lot of races at a lot of places—was even the track champion at the subdivision that used to be the Capital Speedway in Holts Summit.

Fans who still think he’ll climb into a NASCAR Cup car again, though, seem headed for disappointment. He told the Springfield News-Leader he is at peace with his life away from big-time racing.  “That was a pretty crazy pace there for about 15 years,” he told the News-Leader. “I’m an all-or-nothing person, sometimes to my detriment. It’s taken me about a year to actually wind down. I’m just now becoming the friend and the person I should be to a lot of people that I basically didn’t spend a lot of time with for a long time. It’s an amazing opportunity and I’ve really been enjoying it.” 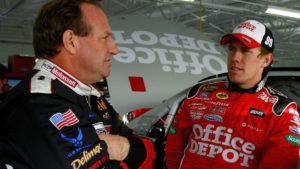 Among those also going into the Hall with Edwards were Mike Mittler, who owned the truck in which Edwards built a lot of the credentials that eventually got him a job with Jack Roush, and Ken Schrader (with Carl), Edwards’ first cousin who continues to race—65 dirt-track races last year—at the age of 62.

Edwards still has an itch to race, too. And he thinks he can scratch his racing itch by going back to his roots, to the modified cars running on local dirt tracks where he built the credentials that took him to the big time. 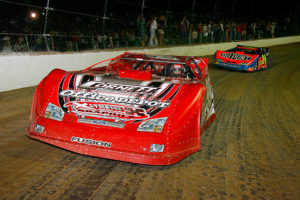 “I love dirt racing,” he says, “I miss it.” (That’s Carl ahead of Jeff Gordon in 2007 at Tony Stewart’s Eldora Speedway.)  He recently told STL Motorsport Magazine, “There will be a time where it’ll be real hard not to go up to Moberly or come over here to Pevely or something and race a little bit. When that time comes it’ll be a lot of fun.”   He admits he might be a “little rusty” because of his year’s absence from the track. Maybe he can borrow some cars from Kenny Wallace, former St. Louisan, one of the three Wallace boys who also made the big show, he says.

(The Pevely I-55 Speedway is owned by Schrader, who also is a co-owner with Wallace, Tony Stewart, and promoter Bob Sargent of a track in Macon, Illinois.)

Two of Edwards’ favorite words are “cool” and “fun.” He thinks he has found a series that meets both criteria. The Global Rally Cross series uses Volkswagen Bugs, Subaru WRXs, Honda Civics, and Ford Fiestas.  With 600 horsepower engines.  On tracks that are half-mile to a mile-long road courses with plenty of drifting and with a seventy-foot jump included.  Heat races set a final ten-car field for wild ten-lap main events. 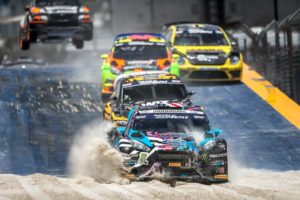 His interest has been piqued by talking to one of the top drivers in the series, Steve Arpin.  If you look it up on Youtube, you might understand why Edwards could think GRC is cool. NBC Sports says Edwards wants to test one of Arpin’s Fiestas.  It would be “really fun,” he says.

Arpin in a former NASCAR driver who thinks GRC cars are more exciting to drive than stock cars.

But Edwards going back to the big NASCAR show?  Other than a record-setting 230 mph run in a 2,000-horsepower Toyota SUV early last year he wasn’t in the racing headlines. He was so away from them that early garage-area speculation that he would return to NASCAR in 2018 quickly evaporated.

It’s 2018 now, year two of the New Life of Carl Edwards.  He’s looking forward to going slowly in the dirt.  And going fast, too, ON the dirt.

Previous Post: « William Jewell’s coach Holley picks up win No. 900
Next Post: Cardinals reach agreements before arbitration with four players at the deadline »