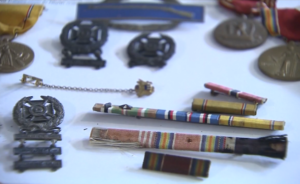 WARRENTON, Mo. — A North Carolina woman is thanking an eastern Missouri veterans group for tracking down a family member’s World War II medals. Victoria Fels’ father-in-law, Edward Fels, was a soldier in WWII and a detailed scrapbook has the last memories of him. Victoria Fels tells KOLR-TV in Springfield that she didn’t even know he had any medals – until the phone rang.

“I got a call from these people in Warrenton, Missouri,” Fels says. “They said they had my father-in-law’s medals.”

“I was in disbelief. I cried. It means everything. It’s just such a nice thing to do,” says Fels.

The medals were lost when a professional cleaning crew helped to clean out Victoria’s mother-in-law’s home 11 years ago. But they somehow found their way to the Veterans of Foreign Wars Office in Warrenton. A Vietnam War veteran found them on a back shelf and went looking for family members of the soldier who earned them.