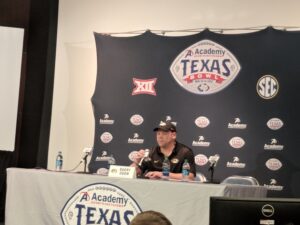 Mistakes doomed the Missouri Tigers in falling to the Texas Longhorns 33-16 in the Academy Sports & Outdoors Texas Bowl.

Mizzou lost the turnover battle four to nothing, including one intercerption and three fumbles with one being a scoop-and-score touchdown for UT.  The Tigers were also penalized nine times for 86 yards.  On the Longhorns opening drive touchdown, Mizzou was penalized four times for forty yards.  The Tigers also allowed a safety on a missed snap out of the end zone.

Mizzou’s offense struggled with consistency, partly due to their starting field position.  Mizzou averaged starting at its own 16, compared to Texas starting at its own 41.  The main reason for this was the Texas Bowl MVP, Michael Dickson, the Longhorns punter that pinned Mizzou inside their 20 on ten of his eleven punts.  Dickson became just the second punter to ever be named MVP of a bowl game.

After entering the Texas Bowl on a six game winning streak, Mizzou’s season ends at 7-6.