You are here: Home / Sports / #Mizzou football just one win away from history (AUDIO) 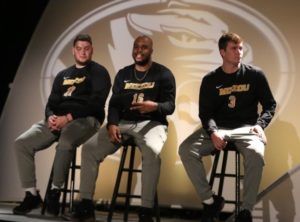 A win over the Longhorns in Wednesday night’s Texas Bowl would be historic for Mizzou, as the 2017 Tigers would become just the second Power 5 team in college football history (Rutgers, 2008) to finish with eight wins after starting the season 1-5.  Mizzou has a six-game win streak in which their average margin of victory has been 30 points while scoring 45 or more points in each game for the first time in program history.  However, the numbers during the regular season may be misleading when you consider the following:

The Tigers 5 losses have come against teams with a combined record of 43-19.#MIZ football has not beaten a team yet with a .500 or better record. Texas would be the first this season.

Mizzou head coach Barry Odom scoffed at those numbers at the Tigers’ press conference on Tuesday in Houston.