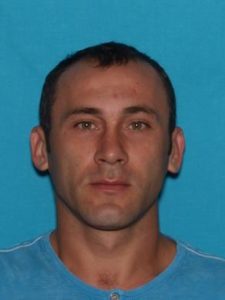 A police alert said the father “has a history of domestic abuse, drug use, and has made current and previous threats towards the child”.

The child and vehicle were taken from the mother during a visitation. A cell phone ping indicates that Viktor Bandurovskiy may be in Houston, TX.

The car Bandurovskiy drove is a white 2008 Scion TC with an Arkansas license plate – 940MNT.

Eli Bandurovskiy is a white male.  He is one-year-old, stands 20 inches, weighs 32 lbs. and has blonde hair and hazel eyes.  He was last wearing a thick navy cardigan sweater with 2 red horizontal stripes and large buttons.

He was also wearing a grey under shirt, blue and gray striped pajama pants, and blue and lime green Velcro tennis shoes. The child had a spare set of clothing described as a grey Christmas sweatshirt, blue shirt, and black skinny jeans.

Viktor Anatolievich Bandurocskiy is a white male.  He is 33-years-old, stands 5-foot, 10 inches and weighs 150 lbs.  He has brown hair, brown eyes and was last seen wearing a black button up shirt and dark blue jeans.

Anyone having any information related to the Amber Alert should immediately dial 911 to contact the nearest law enforcement agency or call the Springfield Police Department at 417-864-1171.