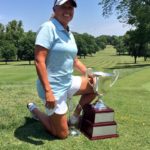 The Missouri Golf Association is excited to announce this year’s Senior Women’s Player of
the Year. The Player of the Year award is presented to an outstanding senior female golfer
who has excelled on the course throughout the season. This year’s recipient is Kathy
Glennon of St. Albans, Missouri. Glennon is a member of Country Club of St. Albans and this
is her second year in a row earning the prestigious award.

This season, Glennon was a member of the MGA Fore State Team and the USGA Women’s
State team. She finished in the top 35 at the USGA Mid-Amateur Stroke Play, match play
qualifier.

“I would say the USGA State Team Championship in Santa Fe and the USGA Mid-Am in
Houston were my most memorable experiences,” Glennon said. “The beautiful Las
Campanas Golf Club in Santa Fe was stunning and it was the final time a State Team
Championship was to be held there. The Mid-Am at historic Champions Golf Club in
Houston was also a great memory. I definitely exceeded my expectations with my play
there and it has given me great confidence moving forward to 2018.”

“I am very pleased with my accomplishments this season,” Glennon said. “I played very well
and focused on consistency. It means a lot to be Player of the Year. I value the MGA and their
efforts to continue to allow Women the opportunities to compete in State level competitions.
There are some great players in Missouri and I am honored to compete against them and play
alongside of them.”