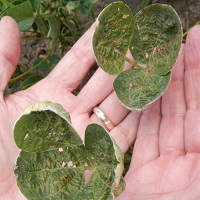 The Missouri Department of Agriculture has issued and collected the first round of fines from 2016’s investigations about a herbicide called dicamba. Civil penalties, ranging from $1,500 to more than $62,000 were issued for pesticide misuse. The money collected will be forwarded to the school district where the violation occurred.

In 2016, department staff conducted and completed 121 investigations. About 60 applicators were investigated as a result of complaints. The department also investigated nearly 100 non-Dicamba related incidents.

“It is important for appropriate enforcement action to be issued in order to deter off-label use and protect the integrity of agriculture,” Director of Agriculture Chris Chinn said in a press release. “We are in the final stages of our case review of 2016 investigations and continuing our field investigations of 2017 complaints and will release information as cases close.”