A Missouri House committee looking into the continuing rise of health insurance costs is finalizing a plan to introduce in the upcoming legislative session. 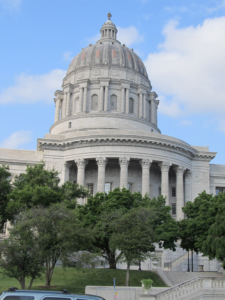 The panel is charged with filing a report of its findings with Republican House Speaker Todd Richardson of Poplar Bluff in January.

GOP committee chair Justin Hill of Lake St. Louis says he plans to file a bill to seek a waiver from key requirements in the Affordable Care Act (ACA).

He contends the health care law has destabilized premium prices since being implemented in 2014, and says it’s now time for the state to determine how federal money is spent.

“Missouri as a whole can now say that we think we know better how to spend the money in our state, because we know our demographics, we know our risks better than the federal government does,” said Hill.

Lawmakers can’t propose a specific waiver on their own, but can legislate authorization for the Department of Insurance to formulate a proposal to the federal government.

Waivers are the brainchild of Democratic Senator Ron Wyden of Oregon, who thought states should be allowed to have flexibility within the Affordable Care Act.  States are given latitude to drop key requirements of the ACA in order to experiment with different health coverage models.

However, the health care law includes guardrails limiting how waivers can be used by states.  Among other things, the guardrails require states to provide coverage that is at least as comprehensive as would be under the ACA, and to cover a comparable number of residents.

So far, only four states – Hawaii, Alaska, Oregon and Minnesota – have been granted waivers.  The Obama administration granted Hawaii the variance because its law had portions that were in conflict with the ACA.  The three other states applied for and received waivers for “reinsurance”, which is a market stabilization program under the Health care law.

The reinsurance program transfers federal funds to individual market insurance plans with higher-cost enrollees in order to reduce the incentive for insurers to charge higher premiums.  Representative Hill thinks the state should apply for a reinsurance waiver as a way to help insurers cover the cost of excessively large claims.

“By doing that, you are essentially focusing the financing,” Hill said.  “You’re able to tell the federal government, ‘Hey look, if we move the financing to this model, we are going to save x-amount of dollars down the road.  Give us that money to implement this program.’”

Timothy McBride is an economics professor at Washington University in St. Louis, who also is Chairman of the state’s Medicaid Oversight Committee.  McBride is cautiously optimistic about the House committee’s plan to recommend the state pursue a waiver, as long as the cost and accessibility of coverage is not affected.

“I’m not willing to shut the door on that,” said McBride.  “I think we should consider a range of options, especially in a state like Missouri that likes to try different things.  It’s worth thinking about this as long as we provide affordable access to coverage for people in the long run.”

Obtaining a waiver through the federal government under President Donald Trump’s administration depends on the actions of Congress.  Trump ran for office on a platform that included repeal and replace of the Affordable Care Act.

One of his first executive orders after taking office directed federal agencies to use their authority to relieve individuals, businesses and state governments from burdens placed on them by the health care law.

Attorney Chris Condeluci served as council to the U.S. Senate Finance Committee which had jurisdiction over developing legislation for the ACA in 2009 and 2010.

During the committee’s recent hearing, he noted that the Trump administration has changed directions several times on waivers, depending on the actions of Congress.

According to Condeluci, if lawmakers seemed to be making progress toward repealing the health care law, the administration discouraged waivers. If Congress regressed or hit a roadblock, the White House would be much more receptive to the option.

Only Congress can make changes to provisions in the health care law, such as loosening the guardrails that require specific levels of access and coverage.  Condeluci thinks the administration, with its current posture against granting waivers, could be sending a message to lawmakers.

“Another signal that the administration may be sending Congress is ‘Look, we’ll approve waivers, but only if, and unless you give us more flexibility to approve those waivers,’” Condeluci said.  “And more flexibility (would be) loosening up those four guardrails in some way.”

Adding more intrigue to the picture is the fact that the Senate tax plan currently in Congress includes a repeal of the health care law requirement for individuals to purchase health care, or face a fine.  Many experts think doing away with the mandate will further undermine the law.

Representative Hill, the committee chairman, thinks regulations within the law must be relaxed in order to stop skyrocketing health care premiums in Missouri.  “The ACA is a one size fits all,” Hill said.  “We want divert the dollars to where it works best for Missouri.”

Two of the three providers on the ACA health care exchange plan steep hikes to premiums in the coming year.  Cigna and Anthem have proposed major rate increases of 42% and 36% respectively for 2018.  The third company, Centene, is entering the exchange for the first time and has previous rate to compare with.