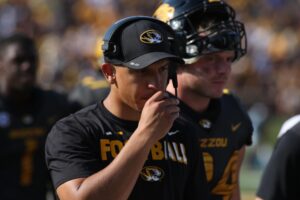 University of Missouri Head Football Coach Barry Odom has promoted Assistant Coach Ryan Walters to the position of defensive coordinator, as announced today. Walters is in his third year with the Mizzou defensive staff, and he’s spent the past two seasons as co-defensive coordinator for the Tigers. In 2017, Walters assumed control of the entire secondary, after focusing on the safeties in his first two years with the program.

Walters oversaw a secondary that developed nicely during the stretch run of the 2017 season, as his group played a key role in Mizzou’s defensive resurgence that helped lead to its current six-game winning streak heading into the Dec. 27 Academy Sports + Outdoor Texas Bowl against Texas.

Eight of Mizzou’s 12 interceptions gained in 2017 came during the final five games of the year, with six of those going to Walters’ secondary. Senior safety Anthony Sherrils had a pair of pick-offs during that stretch, as did true freshman corner Adam Sparks, who emerged late in the year as a solid contributor despite his youth.

“I’m really excited for Ryan and the stability that he will bring to our program, he’s been a tremendous leader and mentor for our players,” said Odom. “He’s one of the best recruiters I’ve been around and his football IQ is top of the line. He’s been a great addition to our staff, we’ve been able to work together now for some time, and he’s had an opportunity every year to go somewhere. He’s a loyal guy who loves Mizzou, he cares about our student-athletes and he cares about having a great defense. He’s done a great job down the stretch here helping us get better every day on that side of the ball,” Odom said.

“This is definitely very humbling, I’m excited and grateful for the opportunity,” said Walters. “Any time you get a chance to work for a great man in Coach Odom and a great school like the University of Missouri, it’s very exciting. I’m looking forward to working with our staff; it’s been a collective effort from the beginning. We’ve got great chemistry in that room, and I’m looking forward to continue building relationships and getting our student-athletes to succeed on and off the field. I’m excited for the future and can’t wait to get to the bowl game and do everything we can to end this season the right way,” he said.

Walters came to MU from Memphis along with Odom in February of 2015 when Odom took over as Mizzou’s defensive coordinator, and he was retained when Odom was named head coach in December of that year.

Walters was a key factor in Mizzou’s 2015 defense that finished in the top 10 nationally in total defense, scoring defense and pass defense. He came to Mizzou after spending the 2014 season as cornerbacks coach at Memphis, where he worked with Odom. At Memphis, the pair oversaw a defense that was among the most improved in the nation. Memphis went 10-3 in 2014, thanks in large part to its defense that ranked fifth nationally in points allowed (17.1 avg.) and 22nd in total defense (343.3 avg.) in the regular season.

Walters, a Los Angeles, Calif., native, played collegiately at Colorado, where he was a standout safety for the Buffaloes (2004-08). He began his coaching career as a student assistant at Colorado working with the secondary in 2009, and then spent two years on staff at Arizona, where he was a graduate assistant in 2010, before being promoted to defensive backs coach for the 2011 season.

From there, Walters moved to the Oklahoma staff as a graduate assistant cornerbacks coach in 2012, as the Sooners went 10-3 and played in the 2013 Cotton Bowl. He moved to North Texas for the 2013 season, where he coached corners and helped lead UNT to a 9-4 record in its first year in Conference USA and a win in the 2013 Heart of Dallas Bowl. The Mean Green defense that season ranked fourth nationally in turnovers gained (34), eighth in points allowed (17.8 ppg), 13th in interceptions (18) and 17th in total defense (348.3 ypg).

As a player, Walters had a standout career at Colorado as a safety. He started in 33 games and played in 46 contests for the Buffaloes. He earned honorable mention All-Big 12 honors from the Associated Press and first-team All-Colorado honors from the state’s National Football Foundation his senior year.

A team captain for the Buffaloes in 2008, Walters was also picked by his teammates as the team’s MVP. He had 87 tackles, two sacks, seven pass deflections, three fumble recoveries and two interceptions his senior year. His 20 career passes defended rate No. 15 in Colorado history and his 223 career tackles were No. 45 all-time.

Walters earned his degree in history from Colorado in December, 2008 with dual majors in History and Ethnic Studies. Walters and his wife Tara have two sons, Aaron and Cason.