A panel chaired Missouri’s Republican Senator Roy Blunt held a hearing on the opioid crisis Tuesday.  Blunt identified three key proposals for battling the problem during the meeting of the Appropriations Subcommittee on Labor, Health and Human Services, Education, and Related Agencies. 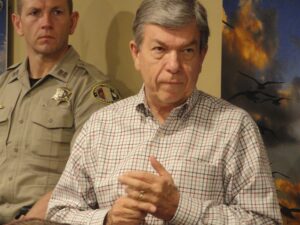 One path calls for finding the best option for treating an opioid use disorder.  Blunt noted unstable mood and anxiety conditions double the risk of addiction.

“If you’re going to effectively address opioid addiction, we need that those suffering can access effective treatment,” said Blunt.  “That needs to include mental health services.”

He also said there needs to be a concerted effort to stem the spread of addiction.  “We need to do all we can to insure that the people we work for, the people of our states and of our country understand the real and obvious risk of taking opioids and taking them in a way that can lead to addiction.”

Thirdly, Blunt said there need to be pain management options that don’t lead to addiction.

During the hearing, Blunt noted the death rates of all drug overdoses now rival the those of the AIDS epidemic in the 1990’s.  He also stated that opioid specific overdoses now supersede car accidents as the number one accidental cause of death in the U.S.

Blunt said he and Senator Patty Murray of Washington, the ranking Democrat on the subcommittee, have actively sought to boost funding to address the opioid epidemic.

“We’ve written bills that repeatedly increased the opioid funding, an increase of about $760 million, which is a 1,300 percent increase from where we were just three years ago,” said Blunt.

Among those testifying at the hearing were former Democratic Congressman Patrick J. Kennedy of Rhode Island, who is now a member of the President’s Commission on Combatting Drug Addiction and the Opioid Crisis, and Dr. Francis S. Collins, Director of the National Institutes of Health.

“If you look at use by first responders, the nasal version has now greatly outstripped the inject-able form in terms of what first responders now have access to,” said Collins.  “(That’s) in part because it’s cheaper, but mostly because it’s easier to administer.  It doesn’t require any special treatment.”

Collins said nasal inhalants for overdoses cost $70, where as injectables go for roughly $4,500.