Missouri State Auditor Nicole Galloway Wednesday threw her support behind a bill that’s been pre-filed for the upcoming legislative session in Jefferson City. 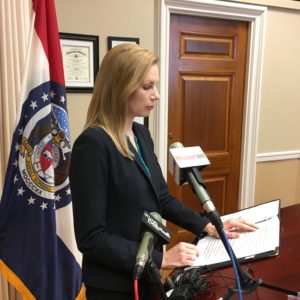 The legislation rolls back a provision in a new discrimination law as it applies to state and local government employees.  The statute was billed as a means to stimulate business activity and job creation by getting rid of burdensome regulations.  But Galloway claims it goes too far by putting public workers at risk.

Among the law’s provisions is one that removes protections for “whistleblowers”, people who report wrong doing in the work place.  The statute in place applies to both public and private sector workers.

The bill backed by Galloway reinstates the whistleblower protections specifically for government employees.

It also includes language seeking to add transparency to the transactions of the state’s Legal Expense Fund, which issues settlement payments for lawsuits against Missouri.  The measure would expressly prohibit non-disclosure agreements in those settlements.

Galloway’s office released an audit in September showing the state had spent more than $9 million over a six-year period on employment discrimination cases.

The reinstatement of whistleblower protections would change existing law, while the effort to track the Legal Defense Fund would establish new legislation.

In a statement, Galloway said “Non-disclosure agreements as a part of state legal settlements, coupled with compromised protections for whistleblowers, allow improper government activity to be shrouded in secrecy.”

McCann Beatty thinks the measure holds those in government accountable for their actions.  “When there is wrongdoing or mismanagement in government, those responsible will go to great lengths to keep the public in the dark,” said Rep. McCann Beatty.

“State law must ensure that people with knowledge of official misdeeds are encouraged to come forward without fear of retaliation and prohibit imposing gag orders on victims to keep the details of taxpayer-funded legal settlements secret.”

Schupp says the bill will shed a light on improper activity in state government.  “It’s time to do away with secrecy in Jefferson City. We should be secure in the knowledge that our tax dollars are being well-managed and that our public officials are held accountable for their actions,” said Sen. Schupp.

“This legislation promotes transparency and protects public employees who speak out for the best interests of Missourians. I urge my colleagues to advance this bill without delay.”

The provision in place that weakens whistleblower protections is included in a contentious law is known as Senate Bill 43, which is central to a “travel advisory” issued by the NAACP.  It’s centerpiece component increases the burden of proof on people claiming workplace discrimination.

In October, the U.S. Department of Housing and Urban Development informed the state the new stipulation is out of compliance with federal standards in the Fair Housing Act.  The agency said Missouri will be suspended from participating in the Fair Housing Assistance Program on March 18th, 2018 if the law is mot revised to be in compliance.